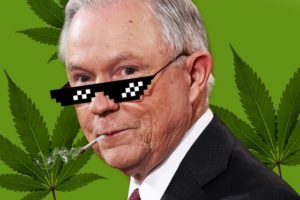 NPR reports as Coloradans toke up in celebration:

Jeff Sessions, the president’s earliest and most fervent supporter in Congress, stepped down as attorney general Wednesday after brutal criticism from the president, bringing an abrupt end to his controversial tenure as the nation’s top law enforcement officer.

President Trump wrote on Twitter after a marathon press conference at the White House that Sessions was out and that his chief of staff, Matthew Whittaker, would serve as an acting replacement.

Of course, there is that Russia thing.

With Sessions out, Trump may attempt to limit or end the probe led by special counsel Robert Mueller III into Russian interference in the 2016 campaign and whether the president himself obstructed justice.

But for today, smoke ’em if you got ’em Colorado! We’ll update with local reactions.