Get More Smarter on Friday (October 26) 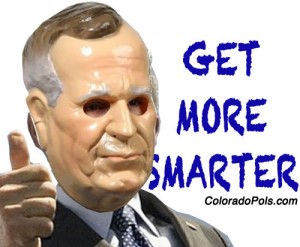 Monday, October 29 is the last day to register for a mail ballot in Colorado. It’s time to Get More Smarter. If you think we missed something important, please include the link in the comments below (here’s a good example). If you are more of a visual learner, check out The Get More Smarter Show.

► Voter Service and Polling Centers are now open. Head on over to GoVoteColorado.com for more information on voting centers, ballot drop-off locations, or for resources to check on the status of your mail ballot. Click here to see the latest ballot return numbers from the Colorado Secretary of State.

► Authorities have arrested a person believed to be the “MAGA Bomber” after a dozen explosive devices were sent to Democratic figures and media outlets such as CNN. As NBC News reports:

A man in Florida was taken into custody Friday and will be charged in connection with the series of bombs found this week addressed to critics of President Donald Trump, law enforcement officials said shortly after the latest two devices were found.

Investigators in the Plantation, Florida, parking lot where Sayoc was arrested could be seen placing a tarp over a van with windows covered with dozens of pictures of Trump and decals, one of which appeared to be a version of a presidential seal.

Conservative commentators have been trying to float the idea that the mail bombs were some sort of “false flag” operation to benefit Democrats ahead of the mid-term election, and President Trump had been lamenting the media coverage of the story as recently as this morning. From the Washington Post:

President Trump lamented Friday that the news media was more focused on covering “this ‘Bomb’ stuff” rather than politics, a development he asserted was slowing Republican momentum in advance of the Nov. 6 midterms.

“Republicans are doing so well in early voting, and at the polls, and now this ‘Bomb’ stuff happens and the momentum greatly slows — news not talking politics,” Trump said in a midmorning tweet. “Very unfortunate, what is going on. Republicans, go out and vote!”

Trump also sent out a Tweet critical of CNN’s news coverage of the investigation at 3:00 in the morning today.

As Danielle Campoamor writes for NBC News, history shows that you “cannot stoke ideological divides and then be appalled when those who listen to you take action.” CNN takes a detailed look at incendiary remarks from Trump and his allies in relation to the bomb threats.

► It continues to look like Republican Rep. Mike Coffman will be ousted in CO-6, which could make the battle for CO-3 the race to watch in the next 10 days. As Westword reports:

When we first previewed this race over the summer, we’d predicted Tipton would “be able to dictate the key issues in the election” because of an expected sizable cash advantage, but Tipton’s money advantage isn’t as large as one might have thought this late in the campaign. Based on the more important cash-on-hand statistics, Tipton still has a solid cash advantage over Mitsch Bush heading into the home stretch (about $491,000 to $408,000). But it’s close enough that Tipton probably won’t be able to fully dictate the terms of the debate in the final days leading up to the election and through mail-in early voting.

► A new ad goes after Colorado Secretary of State Wayne Williams for spending thousands of taxpayer dollars on $700 boots and a $475 cowboy hat.

► As the New York Times reports, President Trump is considering closing America’s southern border to migrants as he attempts to gin up anger over a “caravan” made up largely of women and children. Critics are calling Trump’s pre-election shouting a “manufactured crisis.”

► The Aurora Sentinel takes a look at an oft-forgotten statewide race — the campaign for an at-large spot on the University of Colorado’s Board of Regents.

► Republicans are growing increasingly concerned about their chances in Florida, where Democrats appear to be surging in races for Governor and U.S. Senate. From Politico:

The White House is planning a political rescue mission in Florida, fearing a wipeout in a key swing state next month that could damage President Donald Trump’s reelection hopes.

Trump is expected to visit the state at least twice, according to two people familiar with the plans. Visits from several Cabinet members are likely, as well. Presidential text messages are being sent to Floridians who still haven’t cast their absentee ballots. And discussions are underway about blanketing the state with robocalls from Trump.

The New York Times has been conducting live polls in Florida in the race for Governor and U.S. Senate. The results look encouraging for Democrats.

► CBS4 Denver reports on Thursday’s candidate forum for the candidates for Governor, the last such event before Election Day.

► John Elway, the General Manager of the Denver Broncos, has donated more than $65,000 to Republican candidates like gubernatorial hopeful Walker Stapleton.

► What are the odds that Walker Stapleton shows up to work ever again?

.@WalkerStapleton trotted out this lie in his very first ad & has continued lying throughout the campaign.

So it’s hard to believe his claim that his parking spot has been empty for 44 straight work days because he “occasionally takes the bus.”#whereiswalker #cogov #copolitics pic.twitter.com/BxgSFKD07l

► The “G-Rail” light rail line connecting Arvada to Denver was supposed to open on this date two years ago.

► You’ll need more than a hammer to steal the Magna Carta.

► Do not feed the trolls.