Get More Smarter on Thursday (October 25)

One week from today, half of your office will be at home suffering from the “Halloween flu.” It’s time to Get More Smarter. If you think we missed something important, please include the link in the comments below (here’s a good example). If you are more of a visual learner, check out The Get More Smarter Show.

► Voter Service and Polling Centers are now open. Head on over to GoVoteColorado.com for more information on voting centers, ballot drop-off locations, or for resources to check on the status of your mail ballot. Click here to see the latest ballot return numbers from the Colorado Secretary of State.

► The Washington Post has the latest on the investigation into explosive devices being mailed to Democratic figures (and Robert DeNiro):

Authorities investigating a wave of pipe bombs mailed to prominent figures across the country said Thursday that they have found 10 similar packages, including two sent to former vice president Joe Biden and another mailed to the actor Robert De Niro.

These latest packages set off new alarms amid a sprawling investigation into explosive devices mailed to a string of politicians — including former president Barack Obama and former secretary of state Hillary Clinton — who have all criticized President Trump. Like the others, the packages sent to Biden and De Niro were intercepted before reaching their intended targets and did not detonate. They also prompted a further surge of law enforcement activity as the effort to find the culprit or culprits, along with any other possible explosives, expanded farther across the country.

The devices have prompted unease and heightened security nationwide. Police have increased patrols of high-profile people, areas and organizations that could be targeted, and authorities have warned some prominent figures — including former president Jimmy Carter — to be on alert. Officials rushed to respond to reported suspicious packages from San Diego to Boston, only to determine they were not dangerous.

President Trump is blaming the media for all of the bomb threats, because, of course he is. But as Philip Rucker writes for the Washington Post, the threats all have a common theme (hint: It’s related to a guy who lives in the White House). The folks over at Politico agree:

Trump’s solemn remarks were a jarring contrast with his typical raucous political rallies, where he regularly whips his supporters into a frenzy by mocking his critics and political opponents.

In Trump’s world, Clinton should be imprisoned, Obama “founded” ISIS, CNN is “fake news,” billionaire George Soros is funding liberal protesters and Rep. Maxine Waters (D-Calif.), who called on activists to confront administration officials, should “be careful what you wish for.”…

…“There is a total and complete lack of understanding at the White House about the seriousness of their continued attacks on the media,” CNN President Jeff Zucker said in a statement. “The president, and especially the White House press secretary, should understand their words matter. Thus far, they have shown no comprehension of that.”

► Republican Rep. Mike Coffman participated in what might be his final debate as an incumbent politician on Tuesday evening. We chronicled the 30-minute debate in one of our famous “Debate Diaries,” and were surprised to see Coffman going down without much of a fight.

► 9News stays after the story of tens of thousands of missing ballots in Adams County.

► As the New York Times reports, President Trump’s lack of interest in security protocols means that China and Russia are listening to his phone calls:

When President Trump calls old friends on one of his iPhones to gossip, gripe or solicit their latest take on how he is doing, American intelligence reports indicate that Chinese spies are often listening — and putting to use invaluable insights into how to best work the president and affect administration policy, current and former American officials said.

Mr. Trump’s aides have repeatedly warned him that his cellphone calls are not secure, and they have told him that Russian spies are routinely eavesdropping on the calls, as well. But aides say the voluble president, who has been pressured into using his secure White House landline more often these days, has still refused to give up his iPhones. White House officials say they can only hope he refrains from discussing classified information when he is on them.

Mr. Trump’s use of his iPhones was detailed by several current and former officials, who spoke on the condition of anonymity so they could discuss classified intelligence and sensitive security arrangements. The officials said they were doing so not to undermine Mr. Trump, but out of frustration with what they considered the president’s casual approach to electronic security.

► Do not feed the trolls. They’ll never leave if you do.

► If you don’t get the flu shot, the anti-vaxxers win. Also, you might die.

When John Bolton was a State Department official under President George W. Bush, he loved nothing more than sabotaging international agreements that he felt undermined America’s sovereignty and security. His “happiest moment” at the State Department, he recalled in a 2007 memoir, came when he personally extracted the U.S. from the International Criminal Court.

“I felt like a kid on Christmas Day,” Bolton wrote.

Since his arrival in early April, Bolton has helped to trash, weaken, or undermine four international treaties, organizations and agreements. They range from the major, like the Iran nuclear deal, to the minor, like an obscure 144-year-old international postal treaty from which the Trump administration withdrew last week.

► The New York Times has the latest updates on the battle for control of the U.S. Senate.

► One family whose daughter was killed in the Aurora Theater Shooting believes that District Attorney George Brauchler isn’t fit to be Colorado’s Attorney General because of his actions in the subsequent trial.

► What are the odds that Walker Stapleton shows up to work before the end of the year?

At the last #cogovdebate, @WalkerStapleton was asked about ducking work for 43 straight days.

His response? “Occasionally I take the RTD bus”

► Charles Ashby of the Grand Junction Sentinel reports on the ever-changing saga of Matt Soper, a Republican candidate for the state legislature who does not appear to actually live in the district he is running to represent.

► Colorado Public Radio wonders why the #MeToo movement has become almost an afterthought in many Colorado legislative races.

► The bus is in Glenwood Springs.

► But what color lipstick were they wearing? 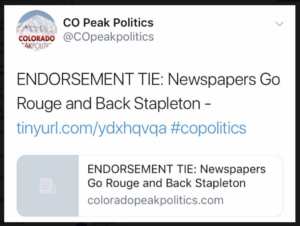 ► Sure! It was probably your agent’s fault that you got in trouble for trying to normalize wearing blackface makeup.

► Protests and pipe bombs: Not the same thing.