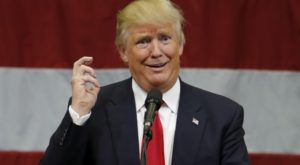 Over the past couple of days President Trump has been suggesting that Congress could vote on a middle class tax cut before the November 6 election. Speaking at a rally for Texas Sen. Ted Cruz on Monday, Trump said, “We’re going to be putting in a 10 percent tax cut for middle-income families.”

There are a number of important problems with this statement, none more troublesome than the fact that CONGRESS ISN’T IN SESSION ANYMORE.

Behind President Trump’s talk of an imminent middle-class tax cut, his advisers are holding discussions on a far more modest proposal to ask Congress to eventually hold a symbolic vote promising a tax cut in the future.

“…to eventually hold a symbolic vote promising a tax cut in the future.” This is a real idea from real human beings who really work for the President of the United States.

Trump was asked about his imaginary tax cuts on Monday in this amazeballs exchange documented at WhiteHouse.gov:

REPORTER: You said “lower tax cuts.” You said that you wanted tax cuts by November 1st. Congress isn’t even in session. How is that possible?

TRUMP: No, we’re going to be passing — no, no. We’re putting in a resolution sometime in the next week, or week and a half, two weeks.

REPORTER: A resolution where?

TRUMP: We’re going to put in — we’re giving a middle-income tax reduction of about 10 percent. We’re doing it now for middle-income people. This is not for business; this is for middle. That’s on top of the tax decrease that we’ve already given them.

REPORTER: Are you signing an executive order for that?

TRUMP: No. No. No. I’m going through Congress.

REPORTER: But Congress isn’t in session though.

REPORTER: Congress is out.

What is happening right now?