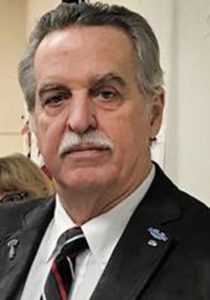 As the Pueblo Chieftain’s Peter Roper reports, last night featured a debate between the two candidates vying to succeed ousted fringe-right Rep. Judy Reyher in Pueblo’s HD-47. As readers will recall the Republican in this race, Don Bendell, ran into trouble when his three children accused him of shirking his child support obligations for many years:

But here’s the thing: Bendell’s Democratic opponent Bri Buentello reportedly didn’t even mention the story of Bendell’s failure to pay his child support in yesterday’s debate. It’s possible that she talked about it elsewhere, but the example Bendell cited was one of independent groups sending mail into the district–which Buentello has no control over. But it doesn’t really matter, because by bringing this up at the very end of their debate, it’s clear that Bendell is the one who wanted to talk about it.

Only problem? He doesn’t have anything mitigating to say:

“Forty years ago, I got behind in child support,” Bendell told the small audience at Pueblo Community College. “I apologized. I paid it. Plus every penny of interest.”

Referring to campaign mailers from a group called Our Colorado Values that have labeled him “Deadbeat Don,” Bendell said that wasn’t true and blamed his first wife, Linda Bendell, for turning his three biologic children against him when they divorced shortly after he left the Army in 1970.

Those children— Britt, Brenna and Brooke— told The Chieftain they became alarmed when they heard their father was running for office in Colorado.

“He’s not the man he appears to be,” daughter Brooke said.

You see, the reason why there are mailers appearing in HD-47 accusing the Republican candidate of being a “deadbeat dad” is because he was in fact a deadbeat dad. It wasn’t the Democrats who brought Bendell’s failure to pay court-ordered child support to the media’s attention, it was Bendell’s own children. And while Bendell may have “fallen behind” on his child support decades ago, he only recently paid it back.

It’s one of those situations where, although you may feel very strongly about saying something in your defense, you just shouldn’t. Bringing your closeted skeletons up voluntarily at the tail end of a debate, thus ensuring it’s the impression everyone attending was left with, is pretty much never a good idea, especially if you have no excuse to offer.

Thus the “party of family values” veers off the rails once again.