Will The President Endorse Other Trump-Loving Candidates In Colorado?

Walker Stapleton’s “complete and total endorsement” this week by Trump came as a surprise, in part because other Colorado candidates, who’ve also backed Trump, did not get the President’s kiss of approval.

Colorado’s Republican candidate for governor appears to be the only candidate who’s invited Trump to Colorado to campaign with him, but other local Republicans have lavishly and loyally supported Trump.

For example, George Brauchler, who’s battling Democrat Phil Weiser to be Colorado’s Attorney General, told fellow Republicans last year that “we’re in pretty damn good hands right now” with Trump, and he called on other GOP candidates to come forward and tell voters if they also cast a ballot for the President.

“And I’m here to tell you I voted for Donald Trump,” Brauchler told the group. “…If you listen to the news, you think we’re on the verge of some sort of Constitutional crisis. This tells me we’re all in pretty damn good hands right now in terms of the United States of America.”

A handful of local state senate races will determine whether Republicans lose their majority in the chamber–and likely hand control of Colorado state government to Democrats.

Some of the Republican candidates in these senate races have stayed silent when it comes to Trump, but Littleton GOP State Sen. Tim Neville, who faces Democrat Tammy Story, is a loyal and vocal Trump backer, who joined other Trump leaders in Colorado this year in celebrating Trump’s “year of greatness” to mark the President’s first full year in office. 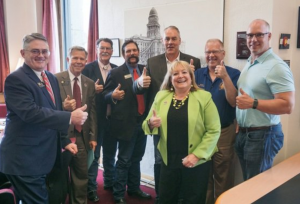 Beth Martinez Humenik, who’s facing Faith Winter in a swing Adams County district, appears to be in Trump’s camp due to the fact that she recently appeared with the President’s Interior Secretary Ryan Zinke and gave him the thumbs up in a photograph.

An email to Humenik’s office seeking clarification of her stance on Trump was not returned. Calls to Wheat Ridge Republican Christine Jensen and to Tony Sanchez, who’s running for a Lakewood senate seat, were also not returned.

On the Democratic side, President Barack Obama endorsed the Democratic candidates, including Winter and Story, in the key races that will likely determine which party controls Colorado’s senate chamber.

Obama also endorsed, among a total of 13 Colorado candidates, Jared Polis, Weiser, and the Democratic candidate for secretary of state, Jena Griswold.

In Colorado’s competitive congressional races, Republican Congressmen Mike Coffman and Scott Tipton both have a 96 percent pro-Trump voting record, even though Coffman chose to vote for Pence, not Trump, in the 2016 election.

It appears that few Republican candidates, if any, have distanced themselves from Trump more than Coffman, whose pledge to stand up for Trump was broken once he got to Congress, if you judge him on his voting record. 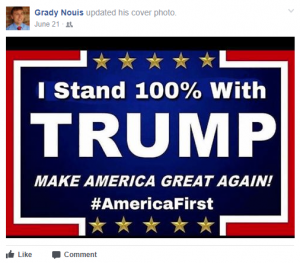 Some Republican candidates for the state house, like Grady Nouis, who’s running for a Westminster seat, are outspoken Trump supporters.

“We, Donald J. Trump SUPPORTERS ARE VICTIMIZED DAILY,” wrote Nouis last year in a Facebook post obtained from a source. “Hate crimes against conservatives of both genders always go unreported, and we continue to take it day after day. “

Former State Rep. Kit Roupe, who faces Democrat Tony Exum for a Colorado Springs seat, stated in an email to a constituent, obtained from a source, “I ask you to vote and to vote for Trump.  By not voting for Trump you are voting for Secretary Clinton and making it easier for her to win. If you believe in the Constitution, in America, then yes, it’s Trump. ”

A email to the White House asking whether Trump would endorse other candidates, besides Stapleton, in Colorado was answered with this message:

Thank you for contacting the White House. We are carefully reviewing your message. President Donald J. Trump believes the strength of our country lies in the spirit of the American people and their willingness to stay informed and get involved. President Trump appreciates you taking the time to reach out.