Readers of Colorado Pols are probably familiar with Faye Griffin, the longtime elected official in Jefferson County who changes jobs like most people change socks.

Griffin is running for re-election as Jeffco’s Clerk and Recorder — because she’ll never not run for some kind of office in Jefferson County government — and you can tell a lot about her from the three endorsements listed on her campaign website. Actually, you don’t even need to read further than the first endorsement: 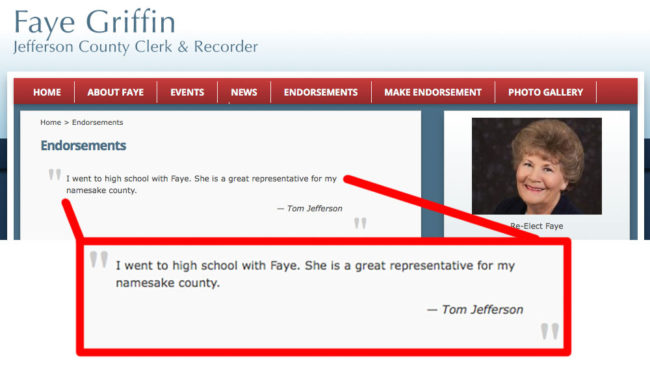 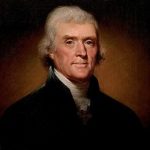 Someone is quite clearly playing a joke here. Griffin’s website includes a link to submit your own endorsement, and this is one of only three recommendations that Griffin could wrangle. Beggars can’t be choosers, we suppose.

It is at once hilarious and terrifying that the person in charge of overseeing elections in one of Colorado’s most important counties apparently has no idea that “Tom Jefferson” isn’t a real endorsement.

Just for grins, we checked Colorado’s voter registration records and found no listing of a “Thomas Jefferson” in Jefferson County.

Griffin is getting up there in years — she’ll be 79-years-old soon — but she’s not quite old enough to have shared a classroom with America’s third President.