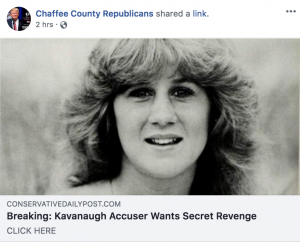 The Republican Party in Chaffee County, Colorado, spread a fake news report this week alleging that “secret revenge” is the real motivation of the woman saying she was sexually assaulted by Trump’s Supreme Court nominee Brett Kavanaugh.

The allegation, determined to be “false” by the fact-checking site Snopes, was that Brett Kavanaugh’s mother, who was a judge, ruled against the parents of Christine Blasey Ford, who says she was assaulted by Brett Kavanaugh.

Martha Kavanaugh did preside for certain parts of a 1996 foreclosure case involving Ralph and Paula Blasey, who are indeed Christine Blasey Ford’s parents. However, Kavanaugh actually ruled favorably toward the Blaseys, who ended up keeping their home. These two facts cause the logic of the conspiracy theory, such as it ever was, to collapse.

The Chaffee County Republicans, who did not immediately return a call for comment, shared the fake news in a Facebook post from Conservativedailypost.com titled, “Breaking: Kavanaugh Accuser Wants Secret Revenge.”