Get More Smarter on Friday (August 31) 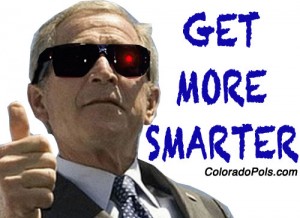 The University of Colorado and Colorado State University face off tonight in Denver for the 90th “Rocky Mountain Showdown.” It’s time to Get More Smarter. If you think we missed something important, please include the link in the comments below (here’s a good example). If you are more of a visual learner, check out The Get More Smarter Show.

► President Trump is totally winning the unpopularity contest. As the Washington Post reports:

President Trump’s disapproval rating has hit a high point of 60 percent, according to a new Washington Post-ABC News poll that also finds that clear majorities of Americans support the special counsel’s Russia investigation and say the president should not fire Attorney General Jeff Sessions.

At the dawn of the fall campaign sprint to the midterm elections, which will determine whether Democrats retake control of Congress, the poll finds a majority of the public has turned against Trump and is on guard against his efforts to influence the Justice Department and special counsel Robert S. Mueller III’s wide-ranging probe.

Read that last one again: Nearly HALF of Americans think Congress should being impeachment proceedings. That’s pretty astonishing.

► Former Arizona Sen. John McCain is being honored in Washington D.C. ahead of burial services on Saturday. McCain’s body is lying in state under the Capitol rotunda today.

► The billionaire Republican donors known as the Koch Brothers revealed their list of Congressional Republicans they plan to help defend this fall through their Americans for Prosperity organization. Colorado Rep. Mike Coffman (R-Aurora) did not make the list. Coffman claims the snub is because of a disagreement on the Farm Bill, which he explained with this very Coffman-esque quote:

“We differed recently on an issue. It was important to them, they wanted a ‘no’ vote on the farm bill. Let me tell you: I was with them last time — I voted ‘no.’ But I voted ‘yes’ this time.”

If you want Coffman to support your position, generally you just need to wait a few months.

Meanwhile, Congressional Republican leaders are getting close to a self-imposed deadline to abandon underperforming incumbents who look likely to lose to Democrats in November. Coffman is probably not at risk of being cut off by the National Republican Congressional Committee (NRCC), but 2018 is shaping up to be a strange cycle.

► If you think Republican Attorney General candidate George Brauchler might be ready to tackle the issue of opioid abuse, you might want to check these campaign finance reports.

► You know your campaign for Governor is struggling when fact-checks about opposition ads just kinda make things worse. Sad trombone for Walker Stapleton.

► President Trump is long past pretending that he might fire Attorney General Jeff Sessions.

► Congressional Democrats are accusing Republicans of leaking sensitive information that could risk the life of a “confidential human source.” From the Washington Post:

Rep. Elijah E. Cummings (D-Md.), ranking Democrat on the Oversight and Government Reform Committee, and his counterpart on the Judiciary Committee, Rep. Jerrold Nadler (D-N.Y.), also accused Republicans of “cherry-picking” portions of emails and text messages between former British spy Christopher Steele and Justice Department official Bruce Ohr to bolster a narrative that they were part of a conspiracy to undermine the Trump campaign in 2016.

The Democrats’ concerns, outlined in a letter to Judiciary Committee Chairman Bob Goodlatte (R-Va.) and Oversight and Government Reform Committee Chairman Trey Gowdy (R-S.C.), arose out of an interview with Ohr that Republican members of the two panels conducted on Tuesday…

…During the course of the eight-hour interview, the lawmakers “repeatedly referenced, read out loud from, and asked the witness questions” about the documents, which had never officially been provided to the two committees, the Democrats wrote.

“But when I start screaming ‘fake news,’ you see those red lights go off for a little while. You know, excuse me, we have technical difficulties, OK, then they go back.”

So. The President of the United States is alleging, with no proof, that TV cameras are faking technical difficulties when he starts talking about “fake news.” Which is weird, because I watched him say this line on TV last night.

And then there is this remark about immigration policies:

A real quote from the President of the United States.

U.S. Sen. Michael Bennet on Thursday sent a scathing letter to the White House’s Office of National Drug Control Policy urging the administration to reconsider its quest to gather negative data about legal marijuana programs, like the one in Colorado.

The letter comes a day after BuzzFeed News reported that the White House and the Office of National Drug Control Policy had created the “Marijuana Policy Coordination Committee,” which has asked more than a dozen federal agencies and the Drug Enforcement Administration to submit stories and data about the “threats” marijuana poses to the U.S…

…The Trump administration’s dealings with marijuana and the Colorado congressional delegation’s involvement in trying to protect the state’s recreational and medical programs has been an ongoing saga since U.S. Attorney General Jeff Sessions rescinded the Cole Memo in January.

► Congressman Doug Lamborn has never been one to tackle subjects that are actually relevant to his office, so this isn’t really a surprise.

► The Associated Press reports on a Trump administration move to ease restrictions on methane gas that is particularly relevant for Colorado:

The Trump administration is rolling back some U.S. regulations on climate-changing methane pollution, calling them expensive and burdensome, but Colorado says its rules are working — and they have industry support.

Energy companies have found and repaired about 73,000 methane leaks since 2015 under a state-required oil field inspection program, according to the Colorado Air Pollution Control Division. The number of leaks fell by 52 percent, from more than 36,000 in 2015 to about 17,250 in 2017, according a state report released last week…

…Colorado, the fifth-largest natural gas producer in the nation, started requiring energy companies to regularly inspect oil field equipment for leaks in 2014. The program is designed to reduce releases of methane and volatile organic compounds, or VOCs, which are also components of natural gas.

Under Trump’s policy, roughly 1.8 million people wouldn’t get an automatic pay boost next year, including Border Patrol and ICE agents.

That stance puts vulnerable GOP lawmakers representing northern Virginia — home to tens of thousands of federal workers — in the political crosshairs. And it sets up an all-but-certain funding fight with Congress next month, as party leaders attempt to reach a sweeping agreement to keep the government open before the start of the next fiscal year on Oct. 1.

Rep. Barbara Comstock (R-Va.), an endangered GOP incumbent in the House, said she would work to reverse the pay freeze.

Trump says that he is cancelling the pay raises because of the “nation’s fiscal situation,” though this wasn’t much of a concern when Congressional Republicans rammed through a tax cut for rich people last December.

► Secretary of Defense James Mattis could be the next member of Trump’s cabinet to be forced out of his job.

► The Notorious RBG has become one of the most prominent faces of the Trump resistance.

► Republicans are apparently leaking sensitive security clearance forms in an effort to damage at least one Democratic Congressional candidate.

► Looking for information on how your state lawmaker represents progressive ideals? Then this is for you.