The website 538.com is out with a new list of predictions for all 435 seats in the U.S. House of Representatives. Take a look at what 538.com’s magic eight ball thinks of Colorado’s perennial battleground seat in CO-6, where incumbent Rep. Mike Coffman (R-Aurora) is trying to fend off Democratic challenger Jason Crow: 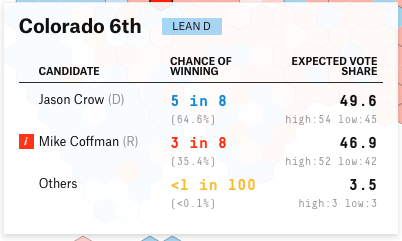 Before we go any further with our analysis here, it’s important to understand the significance of this rating. As far as we can tell (and as far back as our tiny brains can recall), CO-6 has never been rated as anything more competitive than a pure Toss Up seat for Democrats. This would certainly be true prior to redistricting changes in 2012, since the old boundaries of the district (formerly represented by Republican Tom Tancredo) made the seat completely safe for the GOP.

In 2012, the General Election matchup between Coffman and Democrat Joe Miklosi was rated “Leaning Republican” by the New York Times.

In 2014, the race between Coffman and Democrat Andrew Romanoff was labeled a “Toss Up” by prognosticators like the Cook Political Report and Larry Sabato’s Crystal Ball.

In 2016, the Cook Political Report and Sabato’s Crystal Ball considered CO-6 to be a “Toss Up,” while others like “Rothenberg & Gonzales” marked it down as “Tilt Republican.”

The pundits are diverging more in 2018, with Cook and Sabato calling CO-6 a “Toss Up,” and Inside Elections labeling the race “Tilt Republican.” It would be tempting to call the 538.com ranking more of an anomaly if not for several other numbers supporting a bullish outlook for Democrats in CO-6:

♦ Polling results in late February showed Crow with a hypothetical 44-39 lead over Coffman. As we noted at the time, this marked the first public poll showing anyone leading Coffman since he was first elected to Congress in 2008.

♦ Crow has been outperforming Coffman in recent fundraising reports with some eye-popping numbers. Crow raised more than $1 million in the last reported fundraising quarter — 95% of which came from individual donors. By comparison, Coffman raised a little more than $632,000 between April and June.

♦ According to the latest polling results measuring the “generic Congressional ballot,” Democrats have surged to a 52-41 lead over Republicans. Recent election results across the country bear this out; the results of a special Congressional election in Ohio last Tuesday are still too close to call in a district that the Republican candidate won by 36 points in 2016.

♦ Coffman’s full embrace of President Trump isn’t likely to sit well with voters in a district that Hillary Clinton actually carried comfortably in 2016.

Based on prior election victories, we still give Coffman a slight advantage in 2018 (after all, Coffman has been in elected office for 30 years now, so he’s doing something right). But we dare say that the “Crowmentum” appears to be very real indeed.