Don’t Discuss Stapleton and the KKK: A Discussion 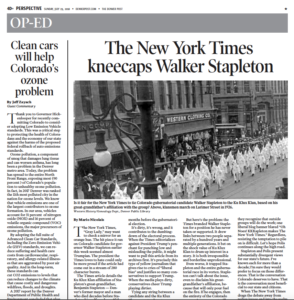 Did you hear about Republican gubernatorial candidate Walker Stapleton’s family connections to the Ku Klux Klan? Because if you didn’t, we know of a conservative columnist who would like to remind you all about it!

Walker Stapleton’s great-grandfather is Benjamin Stapleton, who served as Denver’s Mayor in the 1920s thanks in large part to his close ties with the KKK. This is not a particularly new revelation — Walker even spoke on-camera about great-grandfather Ben when he first ran for State Treasurer in 2010 — but the connection gained new light last week after a long story published in the New York Times. From Times reporter Julie Turkewitz:

Mr. Stapleton, the candidate for governor, once embraced his great-grandfather, making Benjamin’s Stapleton’s civic work a top reason to elect him treasurer.

“My great-grandfather served five terms as Denver’s mayor in the 1920s, in the 1930s, in the 1940s,” he said in a 2009 campaign ad, ticking off the elder Stapleton’s accomplishments — building the airport, reinvigorating the park system. “I’m really proud of my family’s public service.” [Pols emphasis]

But as residents have become more aware of his family’s ties to the Klan, Mr. Stapleton has had to tread more carefully, mostly dropping mentions of his great-grandfather from his campaign.

“It’s 100 years ago, 30 years before I was born,” he said when the Colorado Independent raised the issue recently. “If everybody started trying to apologize or explain what happened with ancestors of theirs who died 30 years before they were born, people would be doing a lot of explaining.”

On Sunday, the Denver Post published a 635-word column from conservative commentator Mario Nicolais inaccurately decrying the Times story as a “hit piece” and “yellow journalism.” The column included a big headline (see photo at top right) with Walker Stapleton’s name next to a gigantic photo of a Klan rally in Denver in 1926. This is probably not helpful for Walker Stapleton.

If the point of Nicolais’ rant was to actually draw more attention to a story that readers of the Sunday Denver Post might otherwise have missed, then we’d say this entire exercise was a smashing success. The second paragraph of Nicolais’ column includes a detailed link to the very same New York Times story that so concerns him:

The Times article details the Ku Klux Klan affiliation of Stapleton’s great-grandfather, Benjamin Stapleton — Denver’s former mayor and a man who died decades before Stapleton himself was born. If the article had stuck to Benjamin Stapleton, and the legitimate discussion of neighborhoods and schools named after him, I might have a different opinion.

But, of course, we aren’t talking about an article that “sticks” only to the topic of Benjamin Stapleton, because it would be completely irrelevant if not for the fact that Benjamin’s great-grandson is running for Governor in 2018. This all makes Nicolais very sad, and he makes sure to explain to readers why this is troublesome for Walker Stapleton:

Tying any string between a candidate and the Ku Klux Klan, no matter how tenuous or twisted, brands the candidate like cattle. The actual process might be short, but the pain and lasting mark stick with the candidate.

If Walker Stapleton had in any way sympathized or supported the Ku Klux Klan, I’d be in favor of this treatment. After all, the Ku Klux Klan is a despicable stain on American history. It is composed of terrorists responsible for many of America’s worst human rights atrocities.

This argument glosses over a very important point: Walker Stapleton has NEVER publicly decried his family ties to the KKK. He’s actually done the opposite — expressing pride in his family’s accomplishments.

Walker is certainly not responsible for the actions of his ancestors. None of us bear that responsibility, but we can always voice our opinion that those actions were wrong. It would have been easy for Walker to say something like this: I find the KKK reprehensible and I’m embarrassed that my family lineage is associated with the Klan in any way. But Walker didn’t say that. The closest he’s come to addressing this subject in a meaningful way is to say “I absolutely condemn racism,” which is nice, but not the same thing. In fact, there is evidence that Walker Stapleton has tried to scrub his family ties to the KKK from a Colorado history museum while he continually refuses to publicly decry those ties.

Let’s get back to the column that started this post. Nicolais channels his inner-Schrödinger when he takes care to point out why a story about Stapleton’s family ties to the Ku Klux-freaking-Klan is so dangerous for the candidate.

Even worse, it trapped Stapleton and the entire gubernatorial race in its vortex. Stapleton can’t talk about the issue, even to disclaim his great-grandfather’s affiliation, because that will only pour fuel on the fire. If he engages, then the entirety of the Colorado progressive movement will bombard his campaign with follow-ups and follow-ups to follow-ups and parsed responses pulled out of context. It makes little sense to anyone who hasn’t worked at the center of high profile campaigns, but after two decades in the field, I recognize the pattern.

Stapleton knows that Coloradans deserve a better debate. And, for the sake of fairness, so does his opponent, Jared Polis. To his credit, Polis’ campaign has not raised the issue. Maybe they recognize that outside groups will do the work; one liberal blog banner blared “Oh Noes! KKKapleton makes The New York Times.” [Pols Note: Hey, that’s us!] Regardless, resisting the temptation to pile on is difficult. Let’s hope Polis continues along the high road.

In short, Nicolais argues here that Walker Stapleton can’t talk about his family ties to the KKK because it is a no-win situation for him.

The irony was not lost on us that he makes this argument in a column that is all about Walker Stapleton’s family ties to the KKK.