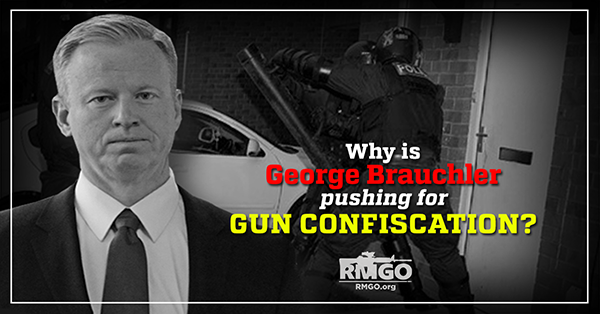 The “no-compromise” gun rights group Rocky Mountain Gun Owners hasn’t forgotten about GOP attorney general candidate George Brauchler’s support this year for a “red flag” law to allow for the temporary removal of firearms from persons in a mental health crisis. Although the go-to GOP refrain following a mass shooting tragedy is the need to “focus on mental health,” when an actual proposal to do just that comes up here’s what you’ll see:

Fellow Patriot, this is absolutely absurd and a gross violation of the Bill of Rights!

So-called “red flag” gun confiscation laws are designed to STRIP law-abiding citizens of Second, Fourth and Fifth Amendment rights by mere accusation from an anti-gun family member, friend, ex-partner, or just about anyone…

Your flood of petitions, phone calls and emails made it impossible for them to pass this GUN CONFISCATION bill.

Then in June, pro-gun primary voters tossed another Republican, Dan Thurlow, out of office for voting for this GUN CONFISCATION scheme.

But, apparently Wist and Brauchler didn’t get the message.

Now they’re threatening to push their gun confiscation bill again regardless of what happens in November.

George Brauchler openly told the gun haters at the Denver Post he wants “to renew efforts to create a ‘red flag’ law in Colorado that would allow GUNS TO BE CONFISCATED. . .”

That’s why I need your help to send them an early message that sponsoring GUN CONFISCATION is not acceptable from any politician.

Brauchler isn’t the only one coming in for criticism from RMGO, being featured along with Rep. Cole Wist who sponsored the legislation in question. Neither of these Republicans can afford to lose too much Republican base support if they want to win in November, but RMGO’s supporters are a powerful and frequently decisive factor in Republican primaries. In the general election, the few points of softening of Republican support that result from being on the RMGO’s naughty list could still be a major problem in a close race.

The thing to remember? Dudley Brown doesn’t care. Dudley wants Republicans to be afraid of him. He wants them to know that their political calculus means nothing to him. And if Brauchler or Wist lose in November, Dudley Brown wants to be held responsible.

Just the guy you need in the mix with a tough election coming, said no Colorado Republican ever.