You Call This “Condemnation?” Seriously?

A few Republicans, like Senator John McCain, offered strong rebukes to President Trump’s anti-American, pro-Russian ramblings yesterday. More Republicans, unfortunately, offered weak excuses. (My vote for the single weakest statement goes to either Senators Cory Gardner of Colorado or Bill Cassidy of Louisiana — both of whom complained about previous presidents.)

A true profile in courage. 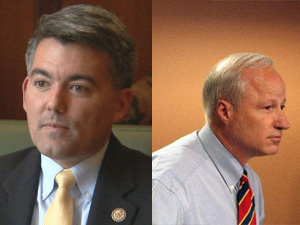 Local news headlines today proclaim what seems to be the desired Republican headline today, blanket bipartisan condemnation of President Donald Trump’s disastrous press conference in Helsinki in which he made an historic fool of himself, sided with a foreign adversary over the consensus of the entire nation’s political and intelligence establishment, and handed Russian President Vladimir Putin such an incredible propaganda victory that Putin should be embarrassed to accept it. 9NEWS:

Senator Cory Gardner and Rep. Mike Coffman join the chorus of Republicans who want to keep an arm’s-length between the U.S. and Russia…

Gardner tweeted in part, “Vladmir Putin’s Russia remains an adversary to the United States and nothing should change as of today.”

As you can see there’s a lot of hot taking going on, doggedly pushing a narrative that condemnation of President Trump’s performance in Helsinki was universal and without regard to partisan lines. But if you take a look at the actual statements from both Sen. Cory Gardner and Rep. Mike Coffman, there’s a distinct lack of, well, condemnation—Gardner:

I encourage the Administration to avoid the mistakes of past Administrations in normalizing relations with Russia at zero cost to Putin and his regime.

President Trump should never take Putin’s word at face value and should give greater consideration to U.S. Intelligence agencies over the Kremlin’s rhetoric. As a Marine Corps combat veteran, and member of the House Armed Services Committee, I don’t take lightly my oath to defend our country against enemies foreign and domestic, and neither should the president. Both Bush and Obama learned this the hard way in their first terms.

We’ll give credit to Rep. Coffman for daring to invoke Trump’s name in his statement, something Gardner wasn’t even willing to do. But neither one of them offered anything close to “condemnation” of Trump’s actions, and both of them sought to deflect from the scandal by criticizing previous administrations. If you compare these milquetoast statements with what Republicans like Ben Sasse and Lindsey Graham and even Paul Ryan are saying, they’re pathetically weak.

It’s just another case of our feckless local political press wanting so hard for local Republicans to be on the right side of a bad story for Trump and the party nationally that they write their desired narrative with no supporting evidence whatsoever. The truth is that Gardner and Coffman did not condemn Trump for what he did in Helsinki in any meaningful way–not nearly as much as many other Republicans were willing to do.

And they don’t deserve a word of praise.