Trump/Putin Summit: As Bad As You Thought. No, It’s Worse.

UPDATE #4: As James Fallows writes for The Atlantic, the moment of truth is at hand for Congressional Republicans:

There are exactly two possible explanations for the shameful performance the world witnessed on Monday, from a serving American president.

Either Donald Trump is flat-out an agent of Russian interests—maybe witting, maybe unwitting, from fear of blackmail, in hope of future deals, out of manly respect for Vladimir Putin, out of gratitude for Russia’s help during the election, out of pathetic inability to see beyond his 306 electoral votes. Whatever the exact mixture of motives might be, it doesn’t really matter.

Or he is so profoundly ignorant, insecure, and narcissistic that he did not  realize that, at every step, he was advancing the line that Putin hoped he would advance, and the line that the American intelligence, defense, and law-enforcement agencies most dreaded…

…with every hour that elapses after this shocking performance in Helsinki without Republicans doing anything, the more deeply they are stained by this dark moment in American leadership.

Today’s press conference in #Helsinki was one of the most disgraceful performances by an American president in memory.

UPDATE #2: From the editorial board of the Washington Post:

In Helsinki, Mr. Trump again insisted “there was no collusion” with Russia. Yet in refusing to acknowledge the plain facts about Russia’s behavior, while trashing his own country’s justice system, Mr. Trump in fact was openly colluding with the criminal leader of a hostile power.

I encourage the Administration to avoid the mistakes of past Administrations in normalizing relations with Russia at zero cost to Putin and his regime.

We had to verify this isn’t a parody account. It’s not. Donald Trump made a mockery of Sen. Cory Gardner’s advice on dealing with Russia (below) today, and Cory Gardner responded by attacking Barack Obama.

It would be funny, just gut-busting comedy, if this was not such a serious matter. 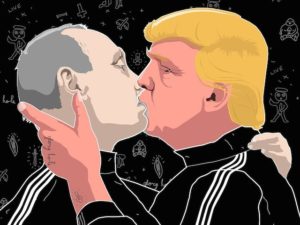 Politico reports as everyone with even a passing interest in the continued sovereignty of the United States–that’s every American, we sincerely hope–picks their jaws up off the floor:

President Donald Trump on Monday publicly sided with Russian President Vladimir Putin over his own intelligence agencies, refusing to condemn the Kremlin for interference in the 2016 election and saying that “I don’t see any reason” to believe that Russia was behind the hacking of Democratic computer servers.

Trump’s remarkable statement, during a joint news conference in Helsinki, Finland, after holding a two-hour one-on-one meeting with Putin, came after special counsel Robert Mueller indicted 12 Russians on Friday over allegations of involvement in the state-ordered election-interference operation…

Trump was directly asked at one point whether he believed the U.S. intelligence agencies, which concluded Russia carried out the hacking of Democratic servers, or Putin, who has said it did not. Trump acknowledged that his own intelligence chiefs “think it’s Russia.”

“I have President Putin, he just said it’s not Russia,” Trump went on. “I will say this: I don’t see any reason why it would be. But I really do want to see the server. But I have confidence in both parties.”

The aghast reaction to this astounding statement from President Donald Trump, defying the mountain of evidence to the contrary and even the indictments last Friday of numerous Russian intelligence agents for their role in subverting the 2016 elections to assist Trump, is at least somewhat bipartisan:

I never thought I would see the day when our American President would stand on the stage with the Russian President and place blame on the United States for Russian aggression. This is shameful.

For the President to side with Putin over his own intelligence officials and blame the United States for Russia’s attack on our democracy is a complete disgrace.

Missed opportunity by President Trump to firmly hold Russia accountable for 2016 meddling and deliver a strong warning regarding future elections.

This answer by President Trump will be seen by Russia as a sign of weakness and create far more problems than it solves. (1/3)

As of this writing, though, there’s no public reaction from Sen. Cory Gardner, but Gardner’s lip service to accountability at a campaign event last Friday left little in the way of wiggle room even for Colorado’s most infamously wiggly Senator:

Russia’s invasion and occupation of Crimea and continuing cyber aggression against the U.S., among other things, should land the country on a list of state sponsors of terror, said Gardner, a member of the Senate Foreign Relations Committee.

“The president needs to be very firm,” Gardner said. “If he’s going to meet with (Putin) at all, it’s got to be about our objections to his malign activities.”

Today’s summit, to put it mildly, does not appear to have passed Gardner’s firmness test.

Trump’s shocking rejection in Vladimir Putin’s presence of the conclusion of the entire U.S. intelligence community, whose findings were backed up by the GOP-controlled Senate Intelligence Committee, is the clearest sign yet that Trump has no intention of doing anything to address a foreign government’s successful campaign to subvert an American election–an absolutely unprecedented situation that former CIA director John Brennan calls “nothing short of treasonous.”

Though unprecedented, this cannot be considered unexpected, even by devoted sycophants like Cory Gardner, given that Trump has denied the facts of Russian meddling in the 2016 elections at every step. The real problem for Republicans, the part they can’t acknowledge, is that they too were beneficiaries of the Russians’ operation to boost Trump, and to acknowledge this fact would inevitably weaken Trump’s legitimacy as President–and by extension, the Republican Party’s unchallenged control of the federal government.

Make no mistake, folks. Something very bad is happening to our country. For Republicans, at least the ones with any conscience or even patriotism left, the surprise victory of 2016 is now the worst-case scenario for their party.