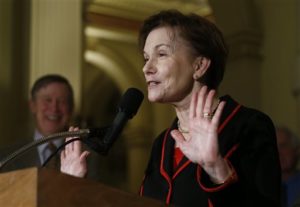 Donna Lynne appears to have nothing up her sleeve as the June Primary approaches.

Lieutenant Governor Donna Lynne’s hopes of winning the Democratic nomination for Governor are fading fast. As Corey Hutchins reports for the Colorado Independent:

Two top staffers for Donna Lynne’s campaign for governor have left or are on the way out amid a staffing shakeup just as the latest fundraising reports become public and primary ballots go out in a little more than a month.

Lynne is a former healthcare executive and the current lieutenant governor who is running her first campaign for public office. She is one of four candidates in an anything-could-happen Democratic primary in Colorado. Her three rivals in the primary have raised more money than Lynne, with one self funding, and are also benefitting from independent groups spending on their behalf.

Lynne’s campaign — or what’s left of it — makes a pretty weak effort to spin this news as something less than disastrous, but we can’t blame them for that.