Walker Stapleton, the front-runner in the Republican race for governor, is facing accusations from a GOP rival that he broke state law when collecting signatures to qualify for the primary ballot.

Doug Robinson, a first-time candidate and nephew of Mitt Romney, is demanding the secretary of state’s office conduct a formal investigation after a secretly recorded phone call raised questions about one person circulating petitions for Stapleton, the current state treasurer.

“We spent so much time and money trying to do this the right way it makes me upset that people were doing it the wrong way,” Robinson said in an interview after claiming Stapleton’s petitions were “gathered illegally.”

The situation sets up some interesting and unpredictable variables. If rumors that Walker Stapleton’s petitions are on the bubble of insufficiency prove correct, any uncertainty about the signatures Stapleton did turn in becomes perilous. The Secretary of State’s “preliminary inquiry” didn’t find anything they considered actionable, but given their track record from 2016 we doubt they’ll have the final word–which explains the appeal over Wayne Williams’ head to Attorney General Cynthia Coffman.

Who, if you haven’t heard, is running for governor too! Once again petition signatures appear to be a real stumbling block for nominally “front runner” Republican candidates. It’s going to be fascinating to watch how this all shakes out for them.

Make some popcorn and stay tuned. 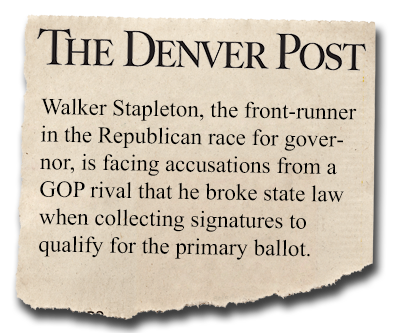 Two years ago, ProgressNow Colorado helped uncover a scandal that ended the campaign of a leading Republican candidate for the U.S. Senate. The discovery of numerous forged petition signatures filed to qualify then-Rep. Jon Keyser for the ballot, led to felony forgery charges against one of Keyser’s petition gatherers and a new law passed in 2017 requiring the Secretary of State to check candidate petitions for signature fraud for the first time.

Fast-forward to 2018. It may be happening again.

Walker Stapleton, a Republican candidate for governor, has been accused by a competitor in the race of illegally gathering signatures to qualify for the June primary ballot. [1] A paid signature gatherer who claims to be collecting signatures for Stapleton boasted in a recorded conversation that “most of my people can’t even register to vote because they’re all felons,” and though he claims to have collected signatures for Stapleton, there’s no record of anyone by his name. [2] Both developments suggest that Stapleton’s campaign broke the law.

The integrity of our elections is at stake. Sign our petition demanding an immediate investigation by Colorado’s Attorney General into alleged lawbreaking by Walker Stapleton’s campaign.

Our democracy works, but only if everyone plays by the rules. In 2016, Jon Keyser’s campaign was caught red-handed turning in forged signatures. The Secretary of State didn’t catch it, and if it wasn’t for ProgressNow Colorado’s investigation, Keyser might well have gotten away with it.

Thanks for taking action to protect our elections. In politics there is truly nothing more important.