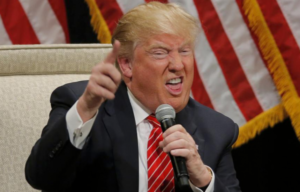 After briefly threatening a veto — and randomly asking Congress to give him line item veto powers (and eliminating the filibuster) — President Trump today signed a massive $1.3 trillion spending deal that includes changes to background checks for gun purchases that Sen. Cory Gardner (R-Yuma) opposed to the very end. If that sentence seems complicated…well, it is. There’s no easy way to unpack the giant omnibus spending bill rammed through by Congress early this morning.

Let’s start things off with the Washington Post reporting from the White House:

Just hours after threatening a veto, President Trump said Friday afternoon that he had signed a “ridiculous” $1.3 trillion spending bill passed by Congress early Friday and averted a government shutdown…

…But speaking to reporters at the White House about four hours later, Trump said he had decided to sign the bill despite his reservations, arguing that it provides much-needed funding for the military, including a pay increase for troops and new equipment.

In his remarks to the media today, Trump was in full angry old man mode. From the New York Times:

In a rambling and disjointed 20-minute statement from the Diplomatic Reception Room, Mr. Trump denigrated the bill, which was rushed through the House and the Senate by members of his own Republican Party, as “crazy” and vowed to never “sign another bill like this again.”

“Nobody read it,” Mr. Trump said of the sweeping funding measure drawn up by Republican leaders in the House and the Senate. Echoing criticism from those who voted against the measure, Mr. Trump added, “It’s only hours old.”

Trump specifically addressed his anger about the 2,322-page spending bill that lawmakers could not have possibly even begun to have read before voting on the measure. The House version of the bill made it to the floor on Thursday after just 16 hours of debate; all four Colorado Republican members of Congress voted to end discussion, moving things along with a narrow 211-207 result. Colorado Reps. Mike Coffman (R-Aurora) and Ken Buck (R-Greeley) were ultimately able to vote “YES” and “NO” on the proposal (Coffman and Buck voted YES on the procedural move before pressing the “NO” button on the final vote).

Over in the Senate, the spending bill passed with 62 votes; Sen. Michael Bennet (D-Denver) voted “YES” and Sen. Cory Gardner (R-Yuma) was a “NO.” Gardner’s vote is particularly interesting because the bill included the “Fix NICS” background check provision that Gardner had been blocking for weeks. The next time Gardner pretends to be concerned about gun violence, remember that he prevented the popular background fix measure from being debated in the Senate and ultimately voted against its final approval.

What else do we know about the giant omnibus spending bill? As CNN’s Gregory Krieg explains, it’s important to consider everything that was NOT bundled into the legislation, such as: 1) DACA and immigration reform, 2) Billions of dollars for Trump’s border wall, and 3) Serious attempts at preventing gun violence, including no new limits on gun purchases.

How did this all happen so quickly? As Sarah Binder writes for the Washington Post, this was Republican strategerie at work:

One of the reasons GOP leaders were keen to rush the bill to a vote is that they didn’t want their partisan base to notice that it both funds innumerable Democratic priorities and blocks the Trump administration from doing such things as expanding detention of immigrants, defunding sanctuary cities, and ending federal funding for the arts, to name a few. [Pols emphasis] The Trump White House and many conservatives wanted deep cuts to domestic programs. Party leaders ignored that. The more quickly the two chambers vote, the less time potential opponents have to unearth details that could outrage the GOP base, who might pressure their representatives to vote against the deal.

To summarize, Congressional Republicans rammed through a humongous spending bill that they didn’t read and didn’t really like that does very little to address their political vulnerabilities on gun violence and immigration reform…and will also likely anger their base of supporters.