House Passes Omnibus Bill Nobody Had Time to Read

UPDATE #2: All four Republicans in Colorado’s Congressional delegation sided with leadership on a narrow 211-207 vote to move the discussion forward. As CNN explains:

The internal GOP backlash to the amount of spending and the process of rushing the measure through just 16 hours after it was released was on full display on the House floor on Thursday. Twenty-five House Republicans broke with their leadership and opposed the usually party line procedural vote bringing up the legislation. But the measure narrowly passed 211-207.

After the vote to move the omnibus debate forward, the House approved the bill with a 256-167 margin…with Republican Reps. Mike Coffman (R-Aurora) and Ken Buck (R-Greeley) conveniently voting “NO.” In other words, Coffman and Buck voted “YES” before they voted “NO.”

UPDATE: House Republicans rammed through the omnibus bill without even waiting for every member to vote. Here’s more from Politico. 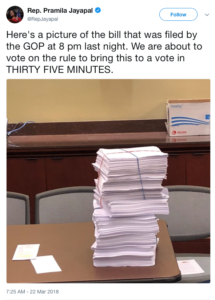 Chris Cillizza of CNN takes note of the absolutely massive new omnibus spending bill that Congress is trying to pass before tomorrow’s deadline for funding the federal government:

On Wednesday night, congressional leaders unveiled a spending bill that will fund the entire federal government through September — at a whopping estimated cost of $1.3 trillion. The bill is 2,322 pages long. It has be to be passed through both chambers of Congress by midnight Friday or else the government shuts down. Again.

Some quick back-of-the-envelope math shows that if every lawmaker stayed up for 48 straight hours — the time, roughly, between when the so-called “omnibus” bill was unveiled and when it needs to be passed — they would need to read an average of 48 pages per hour, every hour, to read the entire thing. Which seems, um, unlikely.

Congressman Mike Coffman (R-Aurora) is a big fan of pretending to read bills before he votes on them, but it’s going to be tough for him to continue that lark with a new omnibus bill that might be taller than the Congressman himself.

As a freshman in Congress in 2009, Coffman had a speaking role in Republican efforts to promote “transparency” and a “read the bill” initiative. Just last March, Coffman Tweeted a photo of himself “reading” Obamacare repeal legislation at his desk in Washington D.C. — at about the same time he was promoting a radio appearance in Colorado to discuss his support of said legislation.

Perhaps we should give Coffman the benefit of the doubt and assume that he has a superhero-esque ability to read and digest complex information in a matter of minutes. Or, perhaps, there is a simpler explanation here.