Obviously, the big surprise is that Steve Barlock has the clear lead among Adams County Republicans in the race for Governor. Barlock is the heavy favorite (33%) among Republican candidates who are seeking access to the Primary ballot via the state assembly, followed by Greg Lopez (18%). Attorney General Cynthia Coffman checks in with a meager 4% of support among Republican caucus-goers.

The Coffman name in general is not especially well-liked according to these figures. Congressman Mike Coffman is a distant second to challenger Roger Edwards in this straw poll. These numbers are probably not indicative of the mood of all Republican caucus-goers, but they may not be too far off the mark; remember that in 2016, an unknown Republican named Kyle Bradell came this close to getting his name on the Primary ballot by winning 26.1% of delegates at the GOP CD-6 assembly. 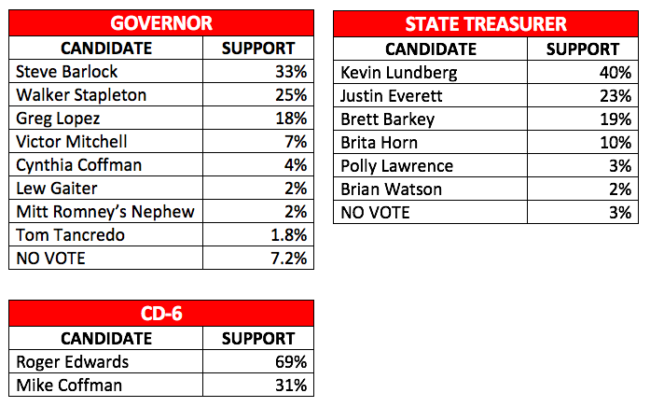 On their Facebook page, the Adams County Republicans also included “votes” from online polls that were available on the County GOP website, but we’re not including those numbers here because…well, they’re online polls.