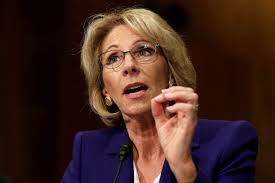 As CNN reports, the White House is not at all pleased with Education Secretary Betsy DeVos following a disastrous series of television interviews:

White House officials were alarmed by Education Secretary Betsy DeVos’ struggle to answer basic questions about the nation’s schools and failure to defend the administration’s newly proposed school safety measures during a tour of television interviews Sunday and Monday, according to two sources familiar with their reaction.

Though DeVos was sworn in to her Cabinet position 13 months ago, she stumbled her way through a pointed “60 Minutes” interview with CBS’ Lesley Stahl Sunday night and was unable to defend her belief that public schools can perform better when funding is diverted to the expansion of public charter schools and private school vouchers. At one point, she admitted she hasn’t “intentionally” visited underperforming schools.

“I hesitate to talk about all schools in general because schools are made up of individual students attending them,” DeVos said, as Stahl suggested that DeVos visit those underperforming schools.

Things worsened as DeVos continued her cable television tour Monday morning. The White House released its proposals for school safety measures after a shooting in Florida killed 17 people. Part of the proposal includes a task force to examine ways to prevent future mass shootings, headed by DeVos. Though the proposals don’t include raising the age limit to purchase firearms from 18 to 21 — as President Donald Trump once suggested — DeVos told Savannah Guthrie on NBC’s “Today” show that “everything is on the table.”

DeVos is no stranger to mucking up interviews, either with reporters or Members of Congress. DeVos’ confirmation as Secretary of Education was nearly derailed early last year after she appeared to be unable to answer some fairly basic questions and infamously said that guns in schools were a good deterrent for grizzly bears. DeVos ultimately made it through her confirmation hearings thanks in part to the support of Sen. Cory Gardner (R-Yuma) and a tie-breaking vote from the Vice President.

DeVos might have reason to worry about her job if not for the fact that there is already a 43% attrition rate in the Trump administration.