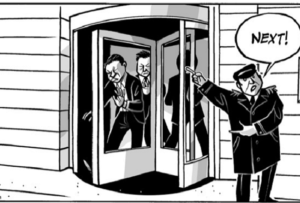 Top White House economic adviser Gary Cohn resigned from his post on Tuesday, adding to an historically-bad attrition rate among senior staffers in President Trump’s administration. According to an analysis by CNN, 35 top staff members have left the White House since January 20, 2017:

According to calculations made by Kathryn Dunn Tenpas at Brookings, there has been a 43% attrition rate among senior staffers within the Trump administration. That’s massively higher than any recent past president; Bill Clinton had the second highest first-year turnover, with 11%.

Here’s more from the Brookings report:

I find Trump’s turnover is record-setting, more than triple that of Obama and double that of Reagan. In looking at why Trump has experienced such high turnover, I argue he has valued loyalty over qualifications and suffered from a White House that has functioned in a chaotic manner. Both features have made it difficult to retain staff and have contributed to the governance difficulties he has encountered. If history is any guide, staff recruitment and retention during his second year could prove challenging as well.

Trump was asked about the turnover in his staff on Wednesday, and as you might have guessed, he said that everything was fine:

“Many, many people want every single job. You know, I read where, ‘Oh, gee, maybe people don’t want to work for Trump.’ And believe me, everybody wants to work in the White House. They all want a piece of that Oval Office; they want a piece of the West Wing. And not only in terms of it looks great on their résumé; it’s just a great place to work.”

In short, the attrition rate for senior White House staff is at 43%. Trump’s approval ratings are at 38%. Both numbers are very bad.