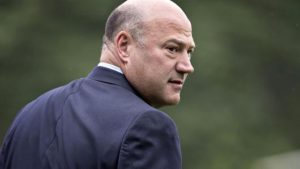 President Trump’s top economic adviser resigned on Tuesday, leaving the White House after losing a major battle with other aides over the implementation of protectionist tariffs on steel and aluminum.

In the past week, Trump has said he will impose tariffs that hit imports from Canada, Germany, Mexico, the United Kingdom, Turkey, South Korea, and a range of other countries, threatening to escalate the penalties if any nation dare to retaliate.

This came after Cohn spent months trying to steer Trump away from tariffs and trade wars, with Trump eventually being outmaneuvered by Commerce Secretary Wilbur Ross, trade advisor Peter Navarro, and ultimately Trump himself.

Larry Kudlow is the early favorite in the clubhouse to succeed Cohn.