Get More Smarter on Friday (February 16)

Prepare for some mighty blustery weather this weekend. It’s time to Get More Smarter. If you think we missed something important, please include the link in the comments below (here’s a good example). If you are more of a visual learner, check out The Get More Smarter Show.

The U.S. Senate failed on Thursday to pass procedural hurdles on four separate immigration measures, most of which were aimed at extending citizenship to Dreamers and enhancing security along the U.S.-Mexico border.

The failure of the measures came as little surprise Thursday afternoon after another morning of fighting between the White House, which adamantly opposed any measures that were not in line with its own, and the rest of the Senate.

And in the end, the White House’s proposal, which was sponsored by Sen. Chuck Grassley, R-Iowa, garnered the fewest number of votes, with just 39 voting to proceed to a final vote.

A bipartisan solution cosponsored by Sen. Cory Gardner, R-Colo., which some had said was the most-likely of the four to pass, garnered 54 votes.

All of the proposals needed to clear a 60-vote hurdle before they could proceed to final votes. None of them did.

► The Denver Post is calling for state Sen. Randy Baumgardner to resign from office following allegations of sexual harassment and a bafflingly weak response from Senate Republican leadership.

► As the Washington Post reports, a younger generation of Americans is now asking why the government won’t do anything to keep them safe:

In the familiar aftermath of America’s latest mass shooting, something new stood out: This time, the kids who survived the rampage on Wednesday were demanding to know why the adults who run the country had not done more to prevent it…

…In the familiar aftermath of America’s latest mass shooting, something new stood out: This time, the kids who survived the rampage on Wednesday were demanding to know why the adults who run the country had not done more to prevent it.

Local officials in the Parkland, Florida region are not at all happy about President Trump’s plans to visit the area in the aftermath of Wednesday’s massacre.

As Hayes notes in the end of the story above, President Trump has signed one gun bill in his time in the White House related to mental health. This actually happened a little more than one year ago:

President Donald Trump quietly signed a bill into law Tuesday rolling back an Obama-era regulation that made it harder for people with mental illnesses to purchase a gun.

The rule, which was finalized in December, added people receiving Social Security checks for mental illnesses and people deemed unfit to handle their own financial affairs to the national background check database.

Had the rule fully taken effect, the Obama administration predicted it would have added about 75,000 names to that database.

President Barack Obama recommended the now-nullified regulation in a 2013 memo following the mass shooting at Sandy Hook Elementary School, which left 20 first graders and six others dead. The measure sought to block some people with severe mental health problems from buying guns.

► The ghost of Tom Tancredo continues to haunt the national debate over immigration reform.

► You’ve got one of them world-class memories if you can recall the last time President Trump held a news conference (it’s been a full year now).

► The editorial board of the New York Times has strong words for the National Rifle Association and the politicians it supports:

The terror that has gripped their elected officials, however, is fear of the wealthy gun lobby, to which they have let themselves be held hostage for decades.

But standing up to gun rights extremists and industry lobbyists can no longer be seen as an act of heroism that could lead to political suicide. It is an act of common sense that would bring our government under the control of its citizens…

…Though many Americans, and some elected officials, have taken a stand to stanch the epidemic of gun violence, the National Rifle Association and its congressional servants have been an unyielding obstacle to sensible reform.

But the gun lobby’s stranglehold on our elected officials does not need to continue, if candidates stand up to the lobby and voters demand that they commit themselves to the sorts of changes that a vast majority of Americans want. 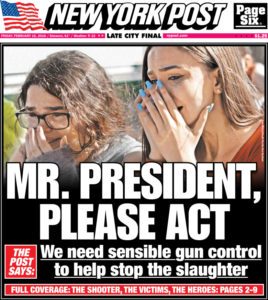 ► The Denver Post wonders what, if anything, Sen. Cory Gardner (R-Yuma) accomplished with his now-abandoned claim to hold up Justice Department nominations until Attorney General Jeff Sessions backed off on legal marijuana enforcement. If you are a betting man (or woman), “Bupkes” opened as an even-money favorite.

► The Aurora Sentinel reports on the death of legislation intended to increase the reporting requirements for child abuse:

A bill in the Colorado Legislature — prompted by students assaulted by teachers in school — that would have extended the statute of limitations for failure to report child abuse to law enforcement was defeated in committee Tuesday.

It sought to extend the timeline limits from 18 months to five years.

The legislation, sposnored by Aurora Democrat state Sen. Rhonda Fields, was postponed indefinitely in the Republican-controlled Senate State, Veterans and Military Affairs Committee, often called the “kill committee,” despite striking a deal with the Catholic Church and support from the District Attorney’s Council.

“When you don’t report, that’s a crime,” Fields told the Aurora Sentinel. “That’s why this bill was important to me.”

Senate Republicans did manage to pass a concealed-carry gun bill out of committee on Wednesday, just hours after the Florida high school shooting. If you’re scoring at home, that’s one point against increased reporting of child abuse and one point in favor of allowing more guns in public.

► Here are two more bills for your scorecard: One point for anti-bullying legislation, and one point against efforts to increase suicide prevention.

► Democrat Jared Polis picked up the endorsement of a major carpenter’s union in his campaign for Governor.

► A citizen’s group on Colorado’s Western Slope released a study showing that oil and gas drilling is a net loss to the community.

► Officials at Colorado State University believe they are getting close to agreeing on a plan that would allow the school to generate 100% of its energy needs from renewable resources by the year 2030.

► Polling numbers for a March 13 special election in Pennsylvania are filled with more bad news for Republicans desperate to hold onto their House majority in 2018.

► Come on, now. You didn’t really think Sen. Cory Gardner (R-Yuma) was going to stick to his demands on the Department of Justice and marijuana enforcement…did you?