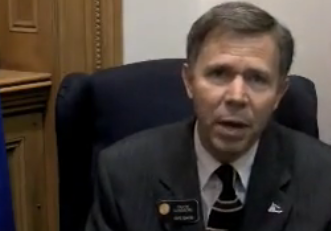 Marianne Goodland of the former Colorado Statesman reports on the explosive controversy resulting from last week’s vote by Republicans on the powerful Joint Budget Committee against funding for the Colorado Civil Rights Commission–the same commission party to a major case before the U.S. Supreme Court alleging discrimination by a Lakewood cake-baker against a same-sex couple:

In a story first reported Thursday by Colorado Politics, the Joint Budget Committee (JBC) failed to pass a 2018-19 budget for the commission last week with a 3-3 tie vote, split along party lines. For now, that vote means the agency will not be funded as of July 1, 2018.

Reaction to the decision has been swift and angry. Sunday, the Colorado Working Families Party, which backs progressive candidates, issued a statement calling on the Republican members of the JBC to end their efforts to undermine the state civil rights agency.

Goodland directs us to a statement from the Good Business Colorado coalition denouncing last week’s vote, and a rally coming up tomorrow on the Capitol steps:

“The vote to defund the Civil Rights Commission may not seem on its surface to be a business issue — but it truly is because it ensures we have the strong foundation on which we are building the Colorado economy.

“Creating a baseline of respect and dignity for all people is a key component to building Colorado’s economy, one of the strongest in the country. If people don’t feel secure, they can’t work, they can’t spend money, and they can’t support our businesses. The Civil Rights Commission gives our employees, customers, and community the confidence that they can be treated fairly and equally in our state.

“Good Business Colorado urges legislators to quickly repair any harm done to the state’s business reputation by reversing this action to undermine the protection of civil rights.”

The pushback against Senate Republicans over this vote against funding for the civil rights commission appears to have significantly exceeded expectations. Today the Senate GOP released this statement from Senate President Kevin Grantham:

@SenatorGrantham made it clear, repeatedly, at today’s press briefing: “We will continue to support the existence of the civil rights commission.” We just want a chance to see/debate the sunset review bill before we vote on funding – which is just common sense #copolitics #coleg pic.twitter.com/oAkFGkZDbs

The problem is that nobody is buying this feeble excuse. Two out of three Republican members of the Joint Budget Committee, Sens. Kevin Lundberg and Kent Lambert, are among the most ardently anti-LGBT members of the Colorado General Assembly. Lundberg praised Kentucky Clerk Kim Davis for “abiding by the laws of God” when she went to jail rather than issue marriage licenses to same-sex couples. Lambert says Colorado’s civil unions law is a “mind-control experiment” to force Coloradans “to believe in homosexual marriage.”

For these and a host of other reasons that everyone knows, the attempt by Senate Republicans to defend this vote against funding for the civil rights commission has fallen entirely flat. It was Kevin Grantham who appointed two of the most homophobic senators in his majority to the JBC. Everybody knows exactly what is going on here and why. If Republicans really didn’t think this puerile attack on the civil rights commission while the commission argues the nation’s biggest LGBT discrimination case before the nation’s highest court wasn’t going to blow up in their faces, they’re more clueless than even we could have imagined.

Because politically, this is just madness. Colorado Republicans who have desperately been trying to turn over a new leaf with tolerant Colorado voters on social issues like LGBT rights have been set back years by this vote. Every day Grantham and company tries to defend their actions only compounds the disaster. So many elections in recent years have punished Colorado Republicans for obsessing with social wedge issues over practical matters, and they just voluntarily saddled themselves with the same baggage once again.

We are honestly surprised this lesson hasn’t been learned. How many more ass-kickings at the polls will it take?