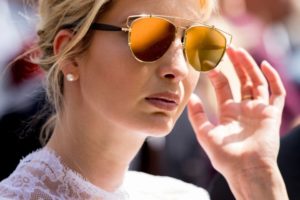 Politico reported this weekend on a refloated idea from First Daughter Ivanka Trump along with Sen. Marco Rubio, creating something Ivanka Trump has paid a great deal of lip service to since her father took office without much success–a paid family leave benefit system for American workers.

But as Seung Min Kim reports, there’s one hell of a catch:

Marco Rubio is starting to strategize with Ivanka Trump to win over skeptical Republicans on a traditionally Democratic issue: paid family leave…

Rubio has barely started crafting a paid leave bill, much less a broader legislative strategy. But he envisions an idea that has recently gained traction in conservative circles: allowing people to draw Social Security benefits when they want to take time off for a new baby or other family-related matters, and then delay their checks when they hit retirement age.

For instance, a person who would begin receiving full benefits when he or she turns 67 years old but wants to take six weeks of paid leave wouldn’t draw Social Security checks until six weeks after his or her 67th birthday.

In short, this latest idea would create a massive new obligation for already overtapped Social Security funds to provide for, with theoretical repayment occurring decades later by the delay of Social Security retirement checks–an arrangement that cannot possibly improve Social Security’s overall solvency. The human costs in terms of forcing families to choose between paid family leave now and retirement benefits later would be delayed, but very real once they retire.

It’s unlikely that even this stingy “revenue neutral” plan would be able to pass in the current GOP-controlled Congress, unless Republicans are willing to set aside all their alleged concerns about the “growth of entitlements” and the long-term stability of Social Security “for those who truly need it.” Closer to home, this bad deal stands in stark contrast to the proposed Family Medical Leave Insurance Program in the Colorado legislature up for its first debate this week. The “FAMLI” program proposed by Democrats in Colorado would be directly funded by employee contributions (limited to .1% of wages) instead of siphoning off dollars from another program.

Meaning it’s designed to actually work, not create more problems down the road.

Despite this, there’s a good chance that Colorado Republicans will use Ivanka Trump’s bad idea to argue that Colorado Democrats’ good idea is unnecessary. When that happens, remember the very large devil in the details.

And when Ivanka’s idea crashes and burns in the Republican Congress, remember that too.