Earlier today we wrote about polling numbers from the American Politics Research Lab (APRL) at the University of Colorado showing absolutely putrid approval ratings for Sen. Cory Gardner (R-Yuma). The APRL poll also included some questions about the 2018 race for Governor, and the results seem to square with everything else we’ve been hearing for the last several months. 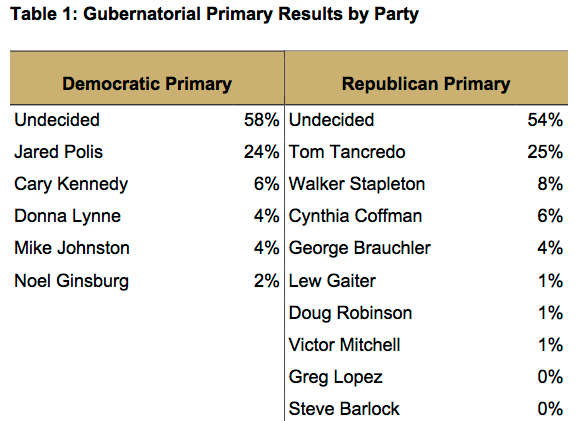 The only other publicly-reported poll numbers about the race for Governor came in October via the Braynard Group. The Braynard (no, autocorrect, not “Barnyard”) poll showed Tom Tancredo atop the Republican field of candidates at 22.1%, with Walker Stapleton the nearest elephant at 8.5%. Braynard put the percentage of “undecided” voters in the GOP Primary at the same 54% as the APRL poll above.

Across the aisle, the APRL poll represents the first publicly-reported numbers on the 2018 Democratic Primary (we’re not counting the mini-results from Cary Kennedy’s campaign). This new poll has Jared Polis atop the Democratic field with 24% support, with Kennedy a distant second at 6% and a whopping 58% listed as “undecided.” We can’t speak to specific numbers here, but the general idea of a Polis/Kennedy race at the top of the Democratic Primary fits with rumors we’ve gleaned about internal polls.