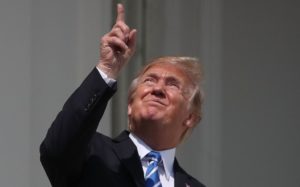 Donald Trump gazes at the sun during last year’s solar eclipse (do not attempt).

Bloomberg reports via the Denver Post on a new move by the Trump administration that could have the at least short-term effect of damaging the booming solar power industry in Colorado:

In the biggest blow he’s dealt to the renewable energy industry yet, President Donald Trump decided on Monday to slap tariffs on imported solar panels.

The U.S. will impose duties of as much as 30 percent on solar equipment made abroad, a move that threatens to handicap a $28 billion industry that relies on parts made abroad for 80 percent of its supply. Just the mere threat of tariffs has shaken solar developers in recent months, with some hoarding panels and others stalling projects in anticipation of higher costs. The Solar Energy Industries Association has projected tens of thousands of job losses in a sector that employed 260,000.

Colorado has more than 6,000 jobs in the solar industry, according to the Colorado Solar Energy Industries Association, 2,000 of which the trade group estimates could be lost as a result of the tariffs. Colorado Gov. John Hickenlooper has been vocal in his opposition to the tariffs.

Despite the explosive growth of consumer solar power installations and solar generation capacity for utilities, Colorado’s experience with solar power as an industry has not been without pitfalls. Abound Solar, a panel manufacturing company with headquarters in Loveland, filed for bankruptcy in 2012 after having received a $400 million loan guarantee from the U.S. Department of Energy. During the company’s heyday, now-Sen. Cory Gardner was a major supporter–who went quiet, needless to say, after the company went belly-up with taxpayers holding the bag.

With that said, it’s important to remember why Abound Solar went bankrupt, along with much more infamous examples of failed solar companies like Solyndra. Despite the goal behind the Energy Department’s loan guarantees of spurring domestic production of solar panels, foreign panel manufacturers, in particular Chinese companies, aggressively “dumped” panels on the U.S. market at prices these American manufacturers could not compete with. Fossil fuel industry backers and political surrogates ripped the Obama administration for the losses suffered by these companies while never really explaining the dynamics behind what happened.

Which means that President Donald Trump is doing the right thing for American renewable energy by slapping tariffs on foreign solar equipment–right? Wrong. Because since the bankrupting of the majority of American solar manufacturers, solar has continued to be adopted en masse by consumers. Today in Colorado, there is no Abound Solar manufacturing panels in Longmont but there are thousands of jobs installing and maintaining solar power infrastructure. We can debate whether trade enforcement back in 2012 would have changed the picture, but the solar economy in Colorado today has adapted to the situation and thrived–to the point where the large cost increases from Trump’s belated protectionism would do more harm than good.

If you’re making policy to help the fossil fuel industry at renewable energy’s expense, you wouldn’t go after foreign manufacturers waging a price war on domestic solar manufacturers in 2012. If President Barack Obama had tried, Republicans would have screamed bloody murder. But today, thanks to the way the solar power industry has evolved, it’s the perfect time for a trade crackdown!

Because the bottom line in both cases is disruption of the solar power industry. A little longer for fossil fuels to hold on to their market share. Which of course translates to millions and millions of dollars.

All renewable energy proponents can do is spell this all out–and hope the voters get it.