POLS UPDATE #2: Well, this just got a bit more interesting.

That’s the one of two alleged perpetrators in custody. The address listed on Schwenkler’s Secretary of State payee filing from this Democratic-aligned 527 (for which, to be fair, he likely only worked for a few days just before the election) can be Googled back to:

The Derailer Bicycle Collective, as profiled by Westword a couple of years ago, has an interesting political history, by all accounts peaceful but slightly to the left of Mikhail Bakunin. You’ve probably never heard of Bakunin because, well, that’s how left these kids are. And most people wouldn’t exactly consider them friends of “bourgeois” Democrats–they’re closer to the “Recreate ’68” set.

Anyway, that would certainly appear to change the complexion of this story. Do you suppose the Democrats got attacked for, um, caving in on ‘socialist’ health care? Original post follows. 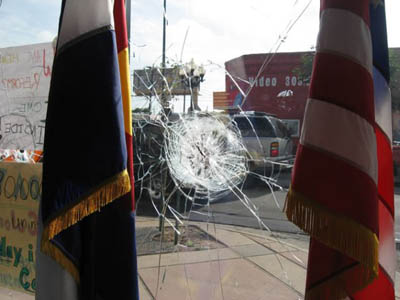 DENVER — Workers at the Colorado Democratic Party headquarters are cleaning up after vandals struck overnight.

Nearly every window of the office on Santa Fe Drive was smashed with rocks. Very early estimates on the amount of damage caused at the office was about $10,000.

Democratic Party Chairwoman Pat Waak said she received a call from police at 2:54 a.m. Waak said she believes the vandalism is connected to the heated debate over health care reform.

This is the lede at Channel 7 News http://www.thedenverchannel.co…

POLS UPDATE: The Denver Post reports the alleged perp is in custody:

The Denver Police Department has a man in custody, though they are not yet releasing the suspect’s name, said Det. Vicki Ferrari.

An officer on patrol spotted the vandal in the act around 2:20 a.m. and took him into custody after a short foot pursuit, she said.

Somebody check the voter file when they release his name, will you?