Northglenn Mayoral Candidate: DON’T Get Out The Vote, Or Else

Readers are sounding the alarm over ominous-looking signs appearing in the north Denver bedroom-community suburb of Northglenn, as the clock ticks down toward next month’s municipal elections: 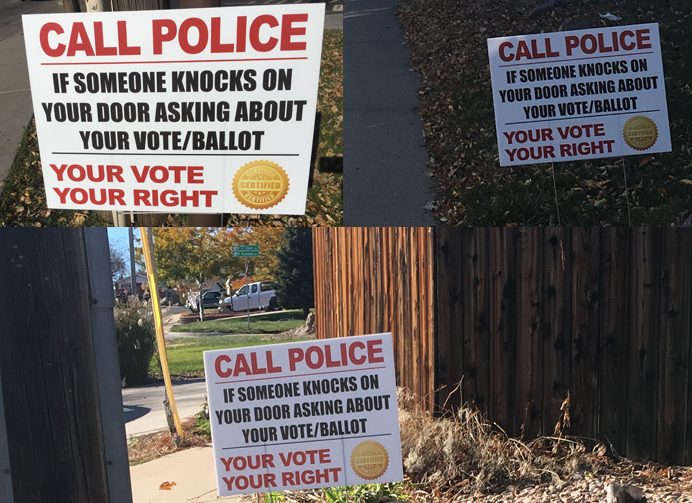 The signs tell Northglenn residents to “CALL POLICE” in the event that, as happens at least a few times on average in any contested election, “someone knocks on your door asking about your vote/ballot.” In the lower right corner of the sign is a gold seal marked “CERTIFIED,” but there’s no indication of exactly what is being “certified,” or by whom. There’s also nothing on these signs to indicate who may have paid for them to be printed and distributed around the city of Northglenn.

Or at least there wouldn’t be any indication of who paid for them, if we hadn’t also received this photo: 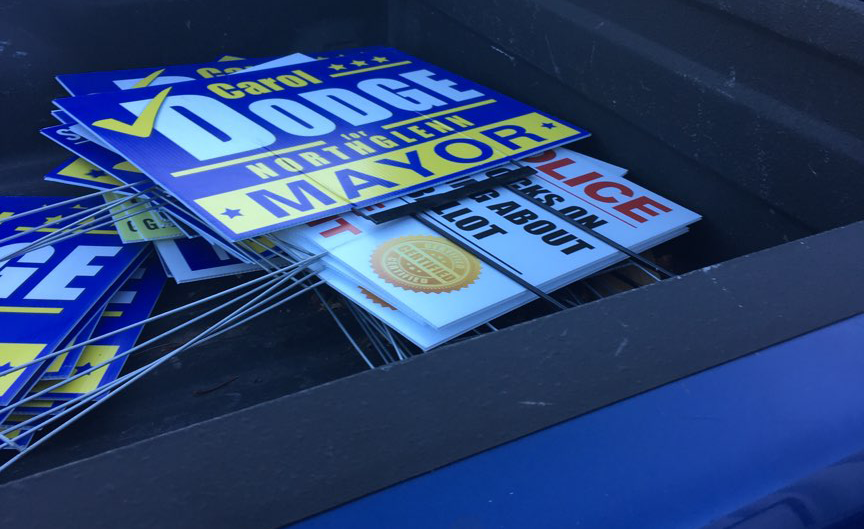 Oops! Sorry about that, Northglenn mayoral candidate Carol Dodge, but whoever is putting out your campaign’s official yard signs needs to be more discreet about…you know, those other signs! It’s been suggested to us that this is Wayne Dodge’s truck, Carol’s spouse and owner of Northglenn’s Dodge Sign Company on East 112th Avenue. We have no way of confirming that detail, but it’s fairly obvious that her campaign is involved.

In any event, it should go without saying that these signs are almost comically unethical, plainly meant to disrupt the normal get-out-the-vote operations common to every municipal election. The fact that Dodge’s campaign is putting up signs like this indicates they aren’t running a field campaign of their own, since she’s telling people to call the cops on field campaigns. That means Dodge is simply not bothering with of the most important tools in a small election, and hoping this ridiculous attempt at intimidation will nullify the enormous handicap that creates for her campaign.

But in case you were in any way unclear–no, dear readers, it is not against the law for get-out-the-vote canvassers to knock on your door. If you call the police on canvassers who politely knock and leave when you ask them to, the canvassers will not be arrested. If anything, you might earn yourself a false reporting charge depending on what you accuse them of. More likely the police will explain all of this on the phone, and then move on to more important matters.

And this will go down as one of the cheaper tricks in Colorado political history.