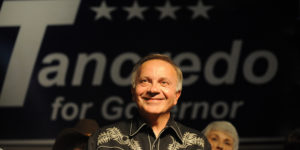 Tom Tancredo during his 2010 run for Governor

As Mark Matthews reports for the Denver Post, former Congressman Tom Tancredo met this week with Steve Bannon about a potential bid for Governor in 2018:

Tom Tancredo said Thursday that he sat down with former White House strategist Stephen Bannon and hinted that the two hard-right agitators discussed the possibility of Tancredo running for Colorado governor next year.

“Ok. What the hell. He is here and yes we met. Fascinating guy. No idea what else his plans are here or frankly, what brought him here. But you know he is my boss at Breitbart!” wrote Tancredo, a contributor to the far-right Breitbart News, where Bannon serves as executive chairman.

Asked whether they discussed the governor’s race, Tancredo responded with a winking emoji and the line: “come to think of it, I believe it came up.” 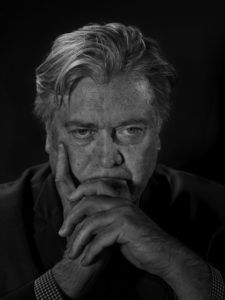 As Politico reports, Bannon was definitely in Colorado on Wednesday after spending Tuesday in Alabama in support of the Senate candidacy of Roy Moore:

Bannon has told associates he wants to recruit candidates in a number of states, including Tennessee, Montana, Missouri, Nevada and Arizona. Bannon is said to be looking for people who will support a populist agenda and oppose candidates backed by the National Republican Senatorial Committee.

“He wants to just repeat Alabama over and over,” according to one associate. [Pols emphasis]

Bannon wants to convince Trump that he is making a mistake by supporting establishment candidates and waffling on his hard-line campaign promises, according to people familiar with his plans.

It makes plenty of sense that Bannon would have met with Tancredo about a potential GOP bid for Governor. Tancredo is a regular columnist for Breitbart, and his political experience and longtime support among hardline anti-immigration activists makes him close to an ideal candidate for the type of anti-establishment uprising that Bannon wants to encourage. The overall political climate may also be setting up in Tancredo’s favor, as Politico explains in a separate story:

Several influential GOP senators argued Wednesday that Strange’s loss in the Alabama primary is a clear sign of frustration from Republican voters, especially with the party’s repeated failures to repeal Obamacare.

In fact, this scenario is pretty much exactly what Republicans were afraid might happen in the wake of Moore’s big win in Alabama on Tuesday. Tancredo, like Moore, is already well-known among Republicans and could hit the ground running in a statewide race. With Bannon’s support, it’s not difficult to envision Tancredo as the GOP nominee for Governor one year from now.