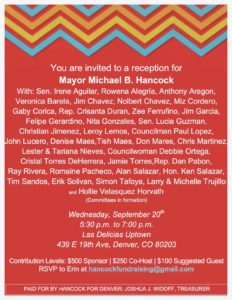 Good politicians with strong political organizations understand that the best way to win an election is to prevent top opponents from ever entering the race.

Denver Mayor Michael Hancock won’t be up for re-election until May 2019, but he’s already working to clear the road for his third term. Hancock is holding a “reception” tonight with some very prominent names on the host list, including House Speaker Crisanta Duran, businessman Zee Ferrufino, former Denver Fire Chief Larry Trujillo, and former Interior Secretary Ken Salazar.

You’ll notice that most of the names on this list are those of well-known Latino politicos in the Denver area, which is certainly by design. A list of supporters like this will undoubtedly make any potential candidates think twice about taking on the two-term incumbent Mayor of Denver. Sure, there is a lot that can happen between now and Spring 2019 that could change the dynamics of the next municipal elections in Denver, but the wise move for any incumbent is to get out in front of possible challengers as soon as possible.

Tonight’s event is not being billed as an official “kick-off” for Hancock’s third term, but the message it sends is unmistakable.