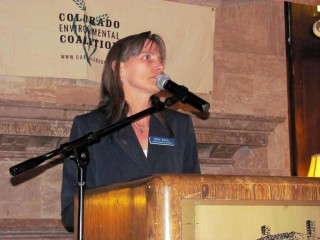 Anti-fracking activists wrote a news release about a demonstration they staged Sunday outside a Marine Street residence in Boulder that they thought was the home where Boulder County Commissioner Elise Jones lives.

Jones does not live there, though, and said on Monday that while she’s one of the owners of the property on the 700 block of Marine Street, she hasn’t lived there for several years.

In a news release, an organization identifying itself as Boulder County Protectors said about 50 community members had marched “on a home of politically compromised Boulder County Commissioner Elise Jones asking her to resign.”

It may not be common knowledge outside their Boulder County stomping grounds, but it’s a fact–as we have gently alluded to on more than one occasion–that the coalition of activists and groups opposed to the expansion of oil and gas drilling into residential neighborhoods runs the gamut from legitimate and thoughtful engagement to…fairly unreasonable. For anyone who wants to see this debate advanced in the direction of greater protections for homes, schools, and businesses from the heavy industrial process of “fracking” for oil and gas, there’s considerable peril in being de-legitimized by less well-adjusted, more strident folks nominally on the same side.

And that’s how we arrive at a group of “fracktivists” in full costume protesting what they thought was the home of Elise Jones, former executive director of the Colorado Environmental Coalition now a Boulder County commish–even calling for her resignation:

Jones said on Monday that while “we all object to fracking” — the process of injecting a mixture of sand, chemicals and water to free up underground oil and gas deposits — she objected to anti-fracking demonstrations that trespass onto private properties.

Cliff Willmeng, of East Boulder County United, one of the groups with members at the Sunday demonstration, acknowledged on Monday afternoon that they’d thought Jones lived at the address in the 700 block of Marine Street but discovered after gathering there that she does not…

Anti-fracking groups have criticized Jones and her fellow county commissioners for not adopting a “Climate Bill of Rights” or advancing such a measure to county voters’ ballots.

Folks, this is ridiculous. Even if you are 100% of the opinion that “fracking” should be banned in Colorado, calling for the resignation of public officials who are much closer to your view than the opposing view is an absurd waste of valuable time and resources. Boulder County, along with city governments along the northern Front Range threatened by oil and gas drilling, has led the struggle against the state government for better protections. Setbacks in the courts and the plain wording for state law as it exists today have constrained the ability of elected officials to respond on this issue to the liking of activists, but for the activists to attack people who in every rational sense are their allies on the larger issue is…

Yes, still ridiculous. And it does not help them advance their cause. On the contrary, it gives pro-drilling opponents ammunition with which to discredit the “fractivists,” and dissuades reasonable people who care about the issue from joining their coalition. It may be satisfying to lash out indiscriminately at everyone in power when something doesn’t go your way, but from a long-term credibility perspective it is the worst possible way to respond.

And all that is true before you mess up the location of the protest.