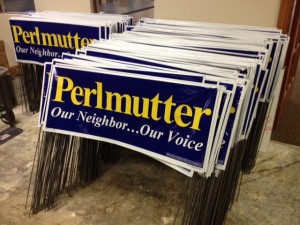 The Denver Post’s Jesse Paul reporting, a wild few weeks of uncertainty in Colorado Democratic politics is rapidly winding down as primary candidates for the congressional seat of incumbent Rep. Ed Perlmutter suspend following his decision to run for re-election again:

State Sen. Andy Kerr on Tuesday morning became the third Democrat to leave the 7th Congressional District race after U.S. Rep. Ed Perlmutter’s announcement Monday that he will run for re-election to Congress after all…

“There’s good reason to be excited about Ed’s decision to run for Congress again,” Kerr said. “He’s a true-blue Coloradan that has spent more than a decade in Washington, D.C., fighting for our values and making sure that we have a strong advocate for Jefferson and Adams counties.”

Sen. Andy Kerr’s statement this morning was preceded yesterday by his principal rival in the race Rep. Brittany Pettersen, whose statement was no less gracious:

“While I’m disappointed I will not have the opportunity to serve our community in Congress, I know that the people of the 7th (Congressional) District will continue to be well represented by Ed Perlmutter,” she said in a written statement. “I am so proud and humbled by the support of the people across Colorado who believed in me and stepped up to contribute, volunteer and support my campaign.”

Sen. Dominick Moreno was first to pull out after yesterday’s announcement, first reported by Colorado Pols, saying “we continue to be in good hands with Congressman Perlmutter.” The only other candidate still nominally remaining the Democratic CD-7 race is Dan Baer, a former Obama administration diplomat who parachuted into the race early in August:

A spokeswoman for Baer, who said he raised more than $300,000 in the two weeks after he announced his campaign Aug. 1, said Monday that he was traveling and “given the number of twists and turns in this race so far, we don’t have any immediate response.”

Whatever, Baer. The fact is, it doesn’t matter what this locally unknown come-lately candidate says at this point. For all intents and purposes the 2018 CD-7 Democratic primary is over, and Baer will just humiliate himself if he ignores that reality.

It’s true that this has been a bizarre turnabout, over the course of months, as Ed Perlmutter entered the gubernatorial race then decided against it as the brutality of today’s politics evidenced by the shooting of GOP Congressman Steve Scalise–and the prospect of a hard-fought primary against Rep. Jared Polis–led him to reconsider. But after a period of introspection, it became clear that Perlmutter’s seniority in Congress and long record of effective leadership in this district are powerful assets that serve his constituents and the state well.

So yes, he gets to do this. As we’ve said before, it’s possible that there is no one in Colorado politics today who has the political capital to pull this kind of episode off without loss of standing besides Ed Perlmutter. His decision to run again, as painful as it is to his would-be successors through no fault of their own, is therefore one that everybody on the Democratic side of the aisle is compelled to accept.

The other candidates will all get their chances, in no small part based on their graciousness today.