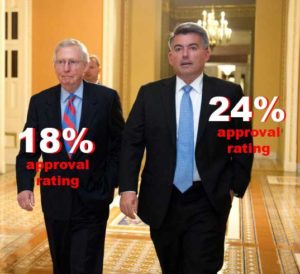 President Trump continues to set new records for plummeting approval ratings after such a short time in office. As we noted over the weekend, Trump’s numbers are falling fast even in states where he performed well in the 2016 election.

Various polling outfits have shown Trump’s approval ratings in the low-30s this summer, which are historically low numbers for a President after his first six months in office. But as The Hill reports today, Senate Majority Leader Mitch McConnell would need to nearly DOUBLE his approval ratings just to catch up to Trump’s record lows:

A Public Policy Polling survey found just 18 percent of respondents approve of the job McConnell is doing, compared with 74 percent who disapprove.

If McConnell were up for reelection today, 37 percent of respondents said they would vote for the Kentucky Republican. Another 44 percent would instead choose a Democratic opponent, according to the survey.

It’s important to understand just how difficult it is to have an approval rating of 18-freakin’-percent. Take a look at some of these comparisons:

♦ Late last year, New Jersey Gov. Chris Christie recorded the lowest approval rating for a sitting governor that Quinnipiac University pollsters had ever measured…and he bottomed out at 19%.

♦ In a February Gallup poll, Russian President Vladimir Putin checked in with a 22% approval rating among Americans.

♦ Former President George W. Bush suffered low approval ratings for much of his second term, but still bottomed out at around 23%.

McConnell was just in Denver last week for a fundraiser with Sen. Cory Gardner (R-Yuma), who has the unenviable job of leading the National Republican Senatorial Committee (NRSC) for the 2018 election cycle. Gardner himself is scraping the floor with approval ratings at a meager 24%.