Get More Smarter on Thursday (May 25)

Don’t worry — it will totally be warm again some day next week. Maybe. It’s time to Get More Smarter! If you think we missed something important, please include the link in the comments below (here’s a good example). If you are more of a visual learner, check out The Get More Smarter Show.

► The Congressional Budget Office finally released its score of the latest Republican health care legislation, and the numbers are very bad. As the New York Times explains:

A bill to dismantle the Affordable Care Act that narrowly passed the House this month would leave 14 million more people uninsured next year than under President Barack Obama’s health law — and 23 million more in 2026, the Congressional Budget Office said Wednesday. Some of the nation’s sickest would pay much more for health care…

…The forecast by the nonpartisan Congressional Budget Office, Capitol Hill’s official scorekeeper, is another potential blow to efforts to undo Mr. Obama’s signature domestic achievement. Republican senators have said they will make substantial changes to the measure passed by the House, but even Senator Mitch McConnell of Kentucky, the majority leader, sounds uncertain about his chances of finding a majority to repeal and replace the health law.

Oh, and insurance premiums for people older than 65 would rise by more than 800%. None of this made Colorado lawmakers particularly happy. Here’s the front page of today’s Denver Post: 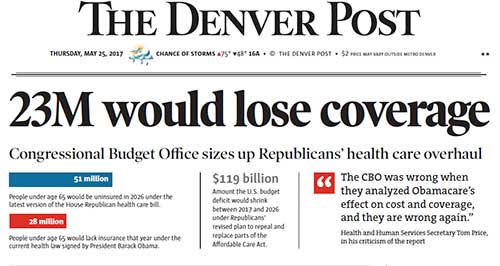 ► Congressman Mike Coffman (R-Aurora) made a candid admission to Politico in a story published today: Congressional Republicans are obliged to bend and twist in order to accommodate the Trump administration.

► Attorney General Jeff Sessions apparently lied to investigators when he was being interviewed for his security clearance. As Chris Cillizza writes for CNN:

The problem here for Sessions — and the Trump administration more broadly — is that the meetings the Attorney General failed to disclose are with the Russian ambassador. Not the ambassador to France or England or literally any other place in the world.

And that means the omissions matter. Because they land amid a federal investigation now being run by special counsel Robert Mueller into Russia’s meddling in the 2016 election and potential collusion with the Trump campaign. And two congressional investigations into the matter. And the firing of former national security adviser Michael Flynn due to his misleading comments about his own conversations with Kislyak. And the Russia ties of former Trump advisers Paul Manafort and Carter Page. And Sessions’ own recusal from the federal investigation due to his meetings with Kislyak. And the reports that Trump asked then FBI Director James Comey to drop the investigation into Flynn and the Russians during a Feb. 14 meeting.

► Today’s special election for a Congressional seat in Montana was thrown into a tizzy when the Republican candidate literally body-slammed a reporter on Wednesday. Greg Pianoforte is being charged with misdemeanor assault on Election Day.

► State Senate Republicans should probably just let this one go before the political damage gets any worse.

► Colorado is only #3? Seems like someone should protest this.

► Governor John Hickenlooper won’t push for the Colorado Oil and Gas Conservation Commission to reconsider an appeal related to a court ruling on public health and drilling.

► President Trump wants to figure out why his administration is so leaky. From CNN:

President Donald Trump arrived at NATO headquarters here Thursday under a cloud of suspicion about the security of foreign intelligence shared with the United States, a controversy he tried to head off by vowing to end leaks of secret information.

Trump was due to face an incensed British Prime Minister Theresa May, who plans to confront him over intelligence leaks about the Manchester suicide attack…

…Trump was facing May for the first time since Monday’s suicide attack in Manchester during a meeting here of European and North American leaders. In the days since the attack, secret information about the investigation has appeared in US media after leaks from American officials.

Meanwhile, Trump used the occasion of his NATO visit to blast members for not paying more money into their club.

► Anadarko will permanently shut down a well connected to the deadly explosion of a home in Firestone last month.

► White House staffers are trying to figure out how to effectively do their job amid the Russia investigation.

► Former Connecticut Sen. Joe Lieberman has withdrawn his name for consideration to become the next FBI Director. Lieberman cited potential political conflicts-of-interest in withdrawing his name. He might have also realized that this would be a terrible job.

► Remember when Donald Trump pounded his chest over “saving” jobs at Carrier in Indiana? As the Washington Post reports, this pledge didn’t turn out well for Carrier employees:

Carrier, the company President Trump pledged to keep on American soil, informed the state of Indiana this week that it will soon begin cutting 632 workers from an Indianapolis factory. The manufacturing jobs will move to Monterrey, Mexico, where the minimum wage is $3.90 per day.

That was never supposed to happen, according to Trump’s campaign promises. He told Indiana residents at a rally last year there was a “100 percent chance” he would save the jobs at the heating and air-conditioning manufacturer.

About 1,400 positions were on the chopping block, per company estimates. Over the past year, Trump has claimed he could maintain at least 1,100 of those jobs in the United States. But on Monday, the company gave official notice to Indiana officials that it would start laying off workers at the factory on July 20 and keep slashing staff until approximately 800 factory employees remain.

► Raise your hand if you would trade places with Paul Manfort right now.

► A federal appeals court has once again refused to lift an injunction against President Trump’s Muslim travel ban.