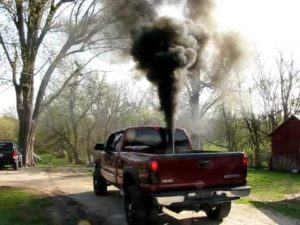 The soon-to-be-illegal practice of “rolling coal.”

After three tries in two years, we’re delighted to note for the record what the Colorado Statesman’s John Tomasic reports:

Senate Bill 278, sponsored in the House by Fort Collins Democrat JoAnn Ginal and in the Senate by Durango Republican Don Coram, passed a final reading in the House today by a wide margin, 40-25.

This is the second version of the bill this year. The first version was killed in a Republican-controlled Senate committee by members who thought the proposed law might net agricultural workers and freight haulers and lead to stricter general vehicle emissions laws. The new version made the behavior and type of vehicles targeted by the law more explicit.

Rolling coal has caught on as a form of defiant cultural protest in the era of climate change and emissions-free vehicles. Drivers pass unsuspecting cyclists and electric car drivers on the road and unleash clouds of toxic black smoke. Coal rollers often post videos of themselves in the act.

The Colorado bill would make rolling coal a traffic infraction and subject drivers to a $100 fine.

Although the bill still could not obtain Republican majority support in either chamber, the support and persistence of Sen. Don Coram was instrumental in getting the second iteration of this bill out of the GOP-controlled Senate. Frankly it’s difficult to understand what the objection to this bill ever was–unless way down deep in your heart, you just think people should be allowed to billow clouds of toxic smoke at hybrid cars, protesters, bicyclists, or whoever else makes the mistake of sharing the road with you.

Thanks to Colorado Democrats and just enough thoughtful Republicans, we can breathe the free air again.