Yesterday was supposed to have been a nationwide day of protest by pro-life conservatives, answering the weeks of massive demonstrations against the new Trump administration and GOP-controlled Congress’ agenda on that and many other issues with their own call to strip Planned Parenthood of federal funding.

But as the Denver Post’s Danika Worthington reports, that’s not how it played out in the Mile High City:

In the morning, more than a hundred people gathered outside Planned Parenthood Rocky Mountain headquarters in east Denver to call for the government to defund the health care service.

They held signs that read “Planned Parenthood lies to you” and “Stop abortion now.” This was one of about 200 protests scheduled across the country.

Then later in the day, more than a thousand rallied outside Republican Sen. Cory Gardner’s Denver office to support funding Planned Parenthood [Pols emphasis] while holding their own variety of signs, including “Girls just want to have fun-ding” and “Nevertheless, she persisted” while chanting “My body, my choice” and “Not the church, not the state, women will decide their fate.”

The estimates we’ve heard for yesterday’s rally outside Sen. Cory Gardner’s office in downtown Denver are all in the thousands. The crowd once again filled downtown Denver’s Skyline Park from 17th to 18th Streets, with more waving signs from adjacent street corners. Attendees lined up to hand-write letters to Sen. Gardner to be delivered this week by protest organizers, noting their local address and unpaid protester status: 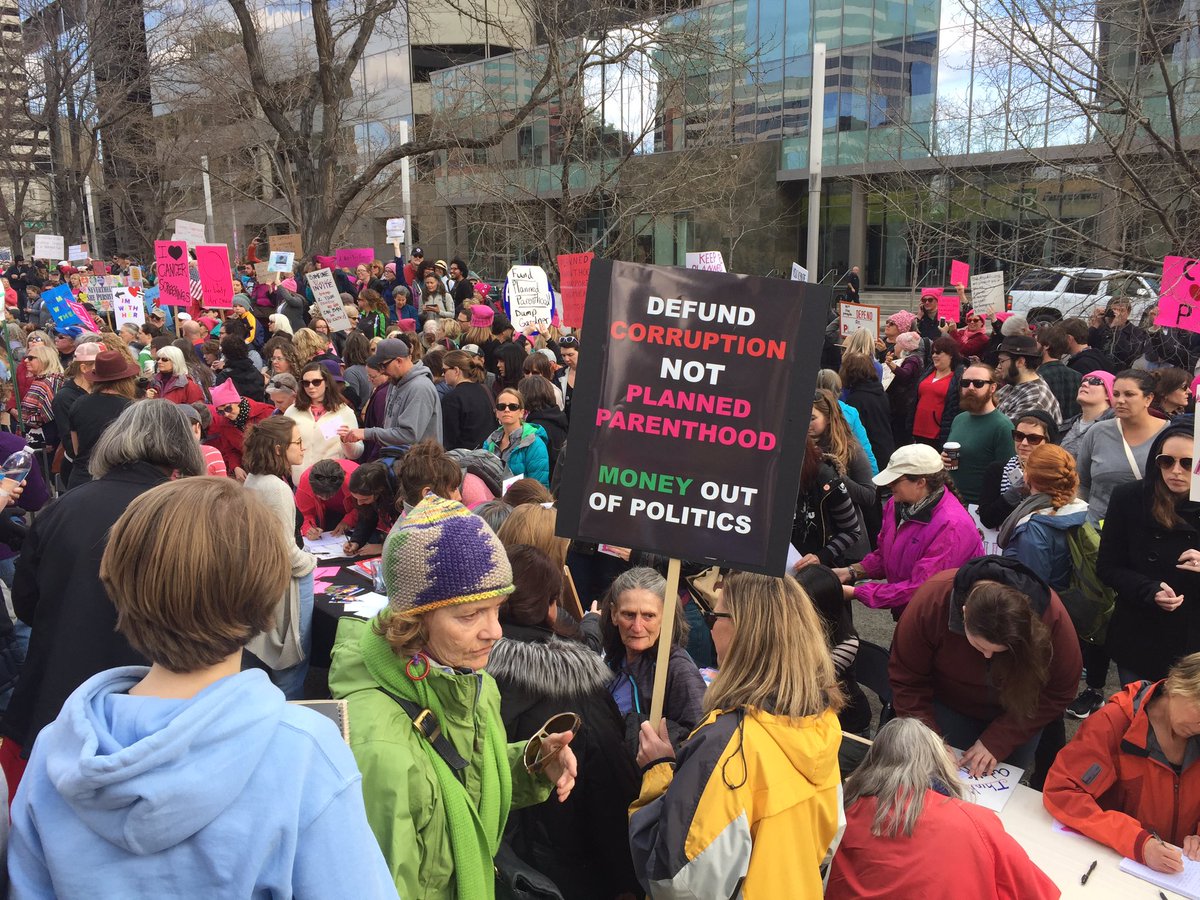 One of the high points of yesterday’s rally was state Sen. Rachel Zenzinger of Arvada, reading the satirical pseudo-children’s book See Joan Run to the delight of thousands of rallygoers:

Bob says, “There are too many Dicks in office.”

In Colorado, #DefundPP was more than a bust. It was a backfire.

The fact that the rally to save Planned Parenthood was held outside Sen. Gardner’s offices also illustrates the growing political threat these actions represent to Republican elected officials here and around the country. Whether Gardner likes it or not–and we suspect he doesn’t like it one bit–he has become the local vessel into which the public is pouring its anger over the GOP’s and Trump administration’s agenda. Gardner’s infamous flip-flops and evasions on the abortion issue in particular on the campaign trail in 2014 have not been forgotten, and stand today as huge liabilities he has made no effort to resolve.

These few short weeks of upheaval cannot tell us what 2020, which is Gardner’s and Trump’s next election, will look like. But if Cory Gardner continues to dismiss what is happening outside his office as the work of “paid protesters” and liberal donor usual suspects?

There is a scenario in which it goes very badly for him.