“Religious freedom is a core American value that we all cherish, and it is already protected by the Constitution. Attempts to give a license to discriminate through religious exemptions are contrary to the notion that we should treat others as we wish to be treated and scores of faith leaders have spoken out against such policies — including last week here in Colorado.

“A Supreme Court that would rule in support of religious exemptions would certainly open LGBTQ Americans up to discrimination and open up a can of worms that could allow individuals to ignore child welfare, domestic violence, or other laws that someone could contend is contrary to their religion.

“The Supreme Court has the potential to shape the future of our nation for generations to come and Supreme Court Justices should be committed to upholding America’s promise of fairness and freedom for all. We call on Colorado’s U.S. Senators Cory Gardner and Michael Bennet to reject President Trump’s nominee.”

“As a fellow Coloradan, Michael congratulates Judge Gorsuch and his family. He takes seriously the Senate’s responsibility to advise and consent on Supreme Court nominations. He intends to review Judge Gorsuch’s record carefully in the coming weeks.”

UPDATE #3: A healthy dose of skepticism from Rep. Ed Perlmutter:

I haven’t reviewed Judge Gorsuch’s record but will remain vigilant against any #SCOTUS decision that threatens our equality, opportunity. 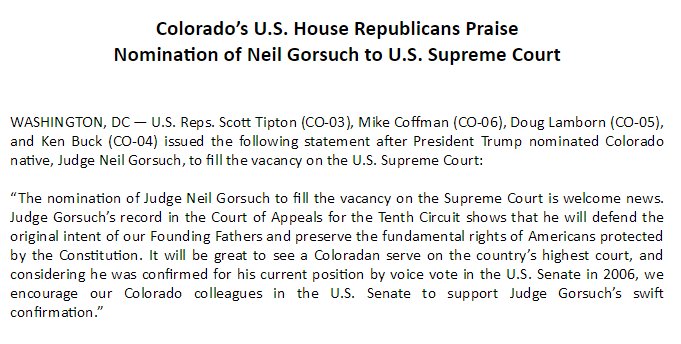 U.S. Sen. Cory Gardner, R-Colo., in a statement Tuesday night called Gorsuch “one of our country’s brightest legal minds with significant experience as a federal judge and a private litigator.”

“He is an ardent defender of the Constitution and he has the appropriate temperament to serve on the nation’s highest court,” Gardner said. “Judge Gorsuch also adds to the court’s Western perspective, with his understanding of uniquely Western issues like water and public lands issues. I’m enthusiastic about the native Coloradan’s nomination and will work to ensure that his confirmation process is fair, thorough, and expedient.”

“Judge Gorsuch has a record of ruling in a way that does not reflect Colorado values on reproductive rights. This is a pro-choice state that supports the Constitutional right to abortion enshrined in Roe and the right to privacy enshrined in Griswold – beliefs that are contradicted in Judge Gorsuch’s ruling in Hobby Lobby and Little Sisters.

What’s troubling in Judge Gorsuch’s ruling in Hobby Lobby was his apparent support for “personhood”, the conferring of legal rights to a fertilized egg. He said that, “the mandate compels Hobby Lobby and Mardel to underwrite payments for drugs or devices that can have the effect of destroying a fertilized human egg.”

This is not only unscientific and counter to Griswold and Roe, it is counter to the will of Colorado voters. Coloradans have said in landslide numbers in the voting booth that they oppose personhood, which would outlaw all abortion and many forms of contraception.

As the first state to allow safe, legal abortion in 1967, after Griswold and before Roe, Colorado has a long, bipartisan history of supporting reproductive rights. Judge Gorsuch does not reflect the will of our state or the Constitutional rights of American women and we would oppose his nomination.”

“Neil Gorsuch is just the latest in a series of horrible choices by Donald Trump,” said ProgressNow Colorado executive director Ian Silverii. “Gorsuch’s fringe views on health care and contraception make him an enemy of Colorado women. On the Supreme Court, Gorsuch would be a vote to roll back women’s rights, environmental protections, and hard-won protections against discrimination in the workplace. Gorsuch has even been endorsed by the founder of the National Organization for Marriage, an anti-LGBT extremist group. Gorsuch may hail from Colorado, but his record stands in opposition to Colorado values.”

“The simple fact is that this Supreme Court appointment was stolen from President Obama last year in a shameful act of Republican treachery,” said Silverii. “No Democrat should in any way cooperate with or otherwise enable Gorsuch’s Supreme Court nomination, including Colorado Democrats. To do so would only hand Trump another undeserved victory.”

UPDATE: It’s Gorsuch. Stand by for statements and coverage. 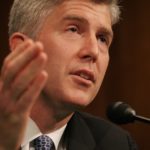 The news has been leaking out of Washington D.C. for the past couple of hours: Colorado Judge Neil Gorsuch appears to be Donald Trump’s choice for the Supreme Court vacancy.

President Trump’s nominee to the Supreme Court will be Neil Gorsuch, a well-respected conservative whose legal philosophy is remarkably similar to that of Antonin Scalia, the justice he will replace if the Senate confirms him. He is, like Scalia, a textualist and an originalist: someone who interprets legal provisions as their words were originally understood.

For more background on Gorsuch, check out Politico and Think Progress.