Coffman “Not a Town Hall” Fiasco a National News Story

U.S. Rep Mike Coffman, R-Aurora, ran into trouble with the audience when he stepped up to the microphone. As he began speaking, several people in the crowd began to heckle him with chants of “No repeal!” a reference to the congressman’s stated desire to dismantle the Affordable Care Act spearheaded by Obama.

Coffman didn’t acknowledge the interruptions during his short speech, which lasted little more than a minute or two. At one point, the heckling almost drowned out the congressman’s words. 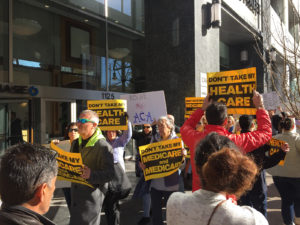 The Coloradans are restless.

The story of this weekend’s public outreach event held by Rep. Mike Coffman at the Aurora Public Library main branch, which witnessed an enormous turnout of upset constituents seeking answers about their health care followed by Coffman sneaking out the back door, went national over the long MLK Day weekend. Here’s a brief roundup:

On Friday, Coffman joined three other Republican U.S. representatives from Colorado in Denver Post opinion page piece about why they would vote to repeal the Affordable Care Act, also known as Obamacare. Some people who showed up for the event were there to talk about the act, according to their social media posts.

According to Coffman’s events page, the Congressman held monthly meetings with constituents at area libraries during the first half of 2016. Saturday’s event was the first since June.

The crowd appeared to be “frustrated” because many didn’t get to meet with Coffman, according to 9NEWS. And before time ran out on the 90 minute meeting, Coffman left. “While more than 100 people were waiting to meet with him, Mike Coffman sneaks out early from his own community event,” Garcia tweeted.

TIME picks up the story:

“Unfortunately, we only reserved the room at the Aurora Central Library for 90 minutes, which is usually plenty of time to see everyone,” [Coffman’s staffer Ben Stein] wrote.

But Slate’s Mark Joseph Stern did some checking, and that’s not a valid excuse:

I’ve learned the library where @RepMikeCoffman held his event would’ve let him stay much longer. Coffman said library needed him to leave.

After publishing an op-ed championing the repeal of the health care law, Colorado Republican Rep. Mike Coffman appeared at one of his scheduled constituent meetings on Saturday to find more than 100 people waiting for him, most hoping to discuss the ACA. The congressman had booked a room in the Aurora Public Library for 90 minutes, part of his regular monthly meetings he holds throughout his district. Despite an opportunity to address the full crowd, Coffman limited his engagement to four people at a time, eventually abandoning the event all together before his time was done and before he could meet with everyone who attended.

A Republican congressman from Colorado has gotten a taste of what the backlash to repealing the Affordable Care Act may be like. Representative Mike Coffman, who co-wrote an op-ed in the Denver Post championing the full repeal of Obamacare on Friday, was overwhelmed by constituents at his own constituent-event in the town of Aurora on Saturday, so much so that he ultimately opted to sneak out of the event early rather than face the as many as 100 disgruntled people still waiting to speak with him…

Coffman’s staff says they only booked the room at the library for a typically-sufficient 90 minutes, and were frustrated they didn’t have more time to meet with everyone. They invited those constituents who went unheard to attend future meetings, which Coffman’s staff will book extra time for. Many constituents were nonetheless angry that the congressman didn’t speak with everyone together once he realized how many people had come to the event.

By all appearances, it was quite a scene. The five-term Republican congressman, representing Colorado’s most competitive district, set up an event at the Aurora Central Library the day after vowing to repeal “Obamacare” in an op-ed. What he and his staff didn’t know was that roughly 200 people who support the Affordable Care Act would show up, eager to ask how and why Coffman intended to undermine their health security.

The GOP lawmaker, according to his office, ended up meeting “with four people at a time for five minutes each,” before a camera caught him sneaking out the library’s back door, hopping in a car, and being driven away.

This is by no means a comprehensive list of the stories about Coffman’s unexpectedly popular outreach meeting, which appears to have received the most attention of any of the many similar protest actions that occurred over the weekend. What we read about these actions elsewhere is that they are similarly exceeding the expectations of organizers. This Inauguration Week is expected to feature more such actions in the lead-up to what’s expected to be very large nationwide protests this coming weekend.

Whatever the next few momentous weeks hold, it’s not going to happen quietly.