The State of the 2018 Governor’s Race 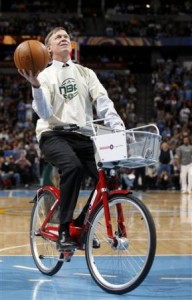 It’s that time of year in an off-year election cycle when the rumors and name-dropping are coming from every direction. On the same day that Gov. John Hickenlooper delivered his State of the State address, we thought it would be a good time to takes a look at what we’re seeing, reading, and hearing when it comes to jockeying for Colorado’s top job in 2018…

IN THE RACE
Noel Ginsburg (D)

As of this writing, there are seven candidates who have officially filed with the Secretary of State’s office to run for governor in 2018. Ginsburg is the only relevant name here; the other six are just gadflies who apparently think it would be fun to run for governor. We’ve written a bit about Ginsburg already, though it’s far too early to gauge whether the Denver businessman can really make a dent in this race.

NOT YET “OFFICIAL,” BUT DEFINITELY RUNNING
George Brauchler (R)
Walker Stapleton (R)
Cary Kennedy (D)
Mike Johnston (D)
Brauchler and Stapleton are both going to run for governor; the only suspense is about when they will make an official announcement. Kennedy and Johnston have been moving toward a run for governor for many months now, and it would be more of a surprise at this point if they chose not to enter the race — although that could change depending on what happens with Ken Salazar and Ed Perlmutter (see below).

GETTING CLOSE TO GETTING IN
Ken Salazar (D)
Ed Perlmutter (D)
Victor Mitchell (R)
Ray Scott (R)
Tim Neville (R)
Ken Salazar and Ed Perlmutter are the key names in this entire field. It is extremely unlikely that both would run, and it’s also unlikely that neither will jump in the race. Decisions by Ken Salazar and Perlmutter will also have an effect on the overall Democratic field; both Cary Kennedy and Mike Johnston will have some serious thinking to do depending on which of these heavy-hitters ultimately decides to run for governor. As of now, consensus seems to be that Perlmutter is waiting on Salazar to make a decision, while rumors about Salazar’s intentions seem to change every few days.

On the Republican side, former legislator Victor Mitchell seems intent on take a shot at governor. Mitchell has been out of the public eye for quite a while now, but he can probably self-finance a bid for governor and could find a path in an always-unpredictable Republican Primary (even if he looks like Dracula). Grand Junction Sen. Ray Scott is pinning his hopes on getting Donald Trump involved (Scott was an early Trump supporter). With Trump, Scott is a serious candidate; without Trump…not so much.

As for Tim Neville, it’s hard to know what to think about the Jefferson County Senator. Neville looked like the clear frontrunner in the GOP field for Senate in 2016…but then he just never really put together an actual campaign and got trounced at the State Republican Convention. Neville also faces re-election to his state senate seat in 2018, and Democrats are going to go after him hard; whether that makes Neville more or less likely to run is difficult to say right now.

THINKING ABOUT IT
Joe Salazar (D)
Mike Merrifield (D)
Justin Smith (R)
Steve House (R)
Owen Hill (R)
State Rep. Joe Salazar hopes to channel Bernie Sanders supporters to his side in a bid for governor, though there’s no guarantee that Bernistas would take up this cause with any real fervor. Salazar would probably, at the very least, need Sanders to openly help him raise money if he were to be a serious candidate.

State Senator Mike Merrifield has been making noise about running for governor, though his efforts seem to be more trial balloon than serious planning. There’s not enough oxygen in the room for Merrifield unless both Ken Salazar and Ed Perlmutter decide not to run.

Larimer County Sheriff Justin Smith flirted briefly with the idea of running for U.S. Senate in 2016, and in retrospect, he probably should have made the leap. Smith is probably the best non-Denver metro area candidate for Republicans, at least in theory. State Republican Party Chair Steve House is thinking about making another run for governor (he couldn’t get through a GOP Primary in 2014), though it’s close to impossible to envision a path to victory here.

State Senator Owen Hill has been mentioned as a potential candidate for State Treasurer, but Brian Watson seems to have gotten the jump on other potential Republican candidates in the race for Treasurer. It’s worth noting that Hill was able to raise decent money when he was briefly a U.S. Senate candidate in 2013, so it’s not out of the question that he could put together a strong campaign for governor.

JUST FLOATING ALONG
Wayne Williams (R)
Kent Thiry (R)
Secretary of State Wayne Williams is going to run for re-election and will likely face only token opposition from Democrats in that regard. DaVita Healthcare Partners CEO Kent Thiry is mentioned as being interested in a potential run, but we haven’t seen or heard anything that would indicate he is truly serious about 2018.