Will Steve House Ever Be Governor? (Answer: No) 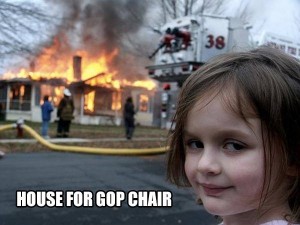 Colorado Republican Party Chairman Steve House is unsure whether he will seek re-election next year as he continues to mull a run for governor in 2018.

House, who has served as chairman of the party since March 2015, said he doesn’t want to put the party through chaos if he does choose to enter the gubernatorial race.

“If I were to run for governor, the one thing I would not do is run for chair again,” House told ColoradoPolitics.com.

The first and most obvious point here is that the GOP field to run for Colorado’s open gubernatorial seat in 2018 is full of bigger names than party chairman Steve House, such as Treasurer Walker Stapleton. It would be a major surprise for all of the candidates higher up the food chain to pull out or fail to the extent that House might be competitive.

As far as House running again for Colorado GOP chairman, it’s hard to see that working out much better. House’s high-profile clash with Attorney General Cynthia Coffman was enormously damaging to both House’s and Coffman’s reputations, and the unresolved bad blood stemming from that red-on-red battle strongly points to a change of leadership at the earliest opportunity. And all that before even considering the still-unresolved #NeverTrump fiasco, part of a chain of events that could leave Colorado in the proverbial doghouse during the incoming Donald Trump administration.

What was it House did before he got into politics again? That’s probably where he should be looking for his next opportunity.