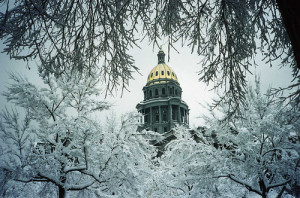 As we emerge from our tryptophan comas–which is a myth, by the way, you were just tired–our friends at the Bell Policy Center contributed a very useful body of knowledge about the growing cost of funding the state’s Medicaid public health insurance system. Going into next year’s legislative session, where the state’s Medicaid commitments will mingle with a much larger national debate over the Affordable Care Act’s future, it’s critically important to keep some basic facts about what’s happening and why:

On November 14, Colorado’s Joint Budget Committee kicked off its first week of meetings to begin the long, intricate process of passing a state budget. The Governor’s FY 17-18 budget request asks for a $142.8 million increase for the Department of Health Care Policy and Financing (HCPF), which administers Medicaid, called Health First Colorado. The discussion turned to why the HCPF budget continues to grow and what can be done about it given the projected state budget deficit. It won’t be the last time we talk Medicaid this session, and the conversation is sure to grow more important after Inauguration Day. But for now, here are some things to keep in mind:

Medicaid provides important support for many types of Coloradans, including many who are working. In last year’s presentation to the JBC, HCPF documented that it insures one in five people in our state. Health First Colorado insures pregnant women, approximately 43% of Colorado child births, children and adolescents, working adults (approximately 74% of those insured by Medicaid are employed), and the elderly and disabled. About one-third of Coloradans over age 65 are living with a disability, according to a report from Caring Across Generations.

Next fiscal year, according to the Office of State Planning and Budgeting (OSPB) nine percent of Medicaid members will be elderly and people with disabilities – but they will account for 42 percent of the overall FY 17-18 expenditures. This week the Governor said, as the Bell has noted, that these numbers will continue to grow. Lieutenant Governor Donna Lynne echoed that this rising piece of the Medicaid caseload will tap right into the General Fund. She added, “long-term care is the single biggest driver with respect to our Medicaid budget.” [Pols emphasis]

And that means something very, very important to the politics of the upcoming debate, from Colorado’s budget to the halls of Congress:

Colorado’s Medicaid expansion under the Affordable Care Act (ACA) is not the main source of General Fund pain. The nonpartisan Colorado Health Institute released a report last May that provided a snapshot of Colorado’s ACA Medicaid expansion efforts to date. It found that the total cost of expansion under the ACA in Colorado was $1.6 billion as of June 2015, which was more than expected. However, this was almost entirely paid for by the federal government. Less than five percent of the expansion was paid for by the state, and those costs were paid out of the hospital provider fee (HPF), not the general fund. [Pols emphasis] The larger-than-expected costs are in part because we experienced growth in enrollees who were already eligible for Medicaid before we expanded Medicaid, but who had not previously enrolled. Starting next year, the state share of the expansion will grow, capped at 10 percent by 2020 under current federal law. Revenues from the HPF are supposed to cover this expense.

With “Obamacare” now the vessel into which all dissatisfaction with American health care delivery is being poured, it’s practically guaranteed that Republicans at all levels will unfairly blame the 2010 reform law for the very different problem caused by rising cost of care and an aging population–a population eligible for Medicaid coverage before President Barack Obama’s “signature achievement” was ever signed. The truth is that between the revenue from the hospital provider fee and federal money to cover most of the Medicaid expansion from the ACA, the expansion is not what’s driving the increase in bottom-line costs for Colorado.

It’s us. It’s our parents. It’s people who can’t be so crassly stereotyped. Because Medicaid is providing this major benefit to thousands more Coloradans with federal funds, it’s boosting Colorado’s economy–not hurting it. And moving into an uncertain 2017, these simple facts about Medicaid’s cost and benefits in Colorado are going to need to be restated again and again. Being able to agree on a common set of facts, after all, is the only way to have an honest discussion about the impact of Medicaid on rest of the budget, the debate over the hospital provider fee and TABOR, or anything else.