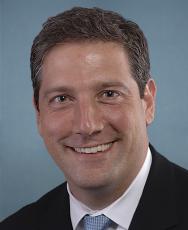 Ohio Rep. Tim Ryan will challenge House Minority Leader Nancy Pelosi for the top Democratic leadership post, the first real test of her leadership since Democrats lost the House in 2010.

“Vote for me and I will dedicate all of my energy to lead us back into the majority. Our constituents deserve nothing less,” Ryan, 43, wrote in a letter to colleagues Thursday afternoon.

“Under our current leadership, Democrats have been reduced to our smallest congressional minority since 1929. This should indicate to all of us that keeping our leadership team completely unchanged will simply lead to more disappointment in future elections,” he added.

There’s significant unrest within the caucus after Democrats’ poor showing on Election Day, but it’s unclear if that will translate into significant support for Ryan. Pelosi’s leadership has clearly been shaken but the longtime leader has a loyal following in her caucus and many think it would take a near-miracle to unseat her.

The 76-year-old Pelosi has helmed the Democratic Congressional caucus for 14 years, and while it would be considered an upset for Ryan to defeat her, a series of disappointing election results certainly help strengthen his argument.