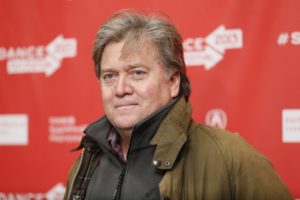 Here’s a statement from Rep. Jared Polis of Boulder, whose office has been inundated with calls about the announcement by President-elect Donald Trump that controversial political strategist Stephen Bannon will take a high-level advisory job in the new administration:

Today community member after community member has contacted my office about the appointment of Steve Bannon to the Trump administration. I am heartened to serve a community that will not stand idly by. The country needs you now more than ever. They need to know you care and are willing to advocate for the principles and values we hold dear.

While Congress has no authority to stop Trump from appointing Bannon, like you – I choose to use my voice to speak out against discrimination. And like many of you, I find Steve Bannon’s history of racist, xenophobic, and misogynistic rhetoric sickening. That is why I signed onto a letter with fellow U.S. Representatives asking Trump to reconsider. [Pols emphasis]

I assure you that in Congress, I will defend the freedom of all Americans, and advocate on behalf of those who Trump targeted during the election – women, Muslims, immigrants, people of color, and all minorities.

We know the truth. The truth is that our freedom and liberties are all tied together, and none of us can be truly free and liberated while holding back another group.

I still have faith in the American people, and I ask you to keep that faith too. Give your neighbors the benefit of doubt and go out of your way to be welcoming.