Natividad defends Trump with, “either you have tough skin or not”

“I’m sure some of them in the drug business are rapists, either in Mexico or when they cross the border,” wrote Natividad in his Facebook post, which was obtained from a source.

“I guess either you have tough skin or not,” wrote Natividad.

When he announed his presidential bid, Trump’s said:

Natividad was apparently not bothered by this.

Natividad: It’s a shame when the Hillary campaign callled Latinos needy, not one Latino, Federico, Salazar, those Texas brother Latino clowns, did not raise an eyebrow, just fell in line, mesmerized. Yet Trump mentions all those illegal Mexicans moving drugs and weapons across the border feeding our drug demise and oh my god, he said that of Mexicans. I guess either you have tough skin or not…and I’m sure some of them in the drug business are rapists, either in Mexico or when the cross the border.

Natividad did not return a call for clarification and to get his thoughts on whether he stands behind his defense of Trump, and his attacks on Pena and Salazar, especially now that Hispanic voters are seen as one of Trump’s biggest obstacles to winning the election. 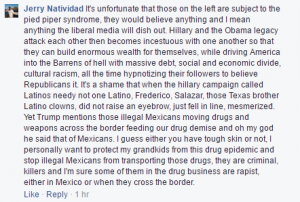