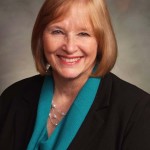 GOP incumbent Rep. Kit Roupe of Colorado Springs is in a tough rematch race against the man she narrowly defeated in 2014’s GOP “wave year,” former Rep. Tony Exum. Running in a swing district, Roupe is trying hard to minimize unsightly details from her record to appear moderate–responding with umbrage to an ad attacking her yesterday:

Do you check negative ads? I just came across one claiming I called for investigating Planned Parenthood and asked you to check the facts at CFA Foundation 2016 Voters Guide. That’s news to me! And, if you check the voter’s guide my name is followed by no answers…. why? Because I did not complete the survey. [Pols emphasis] CFA voter guide So, go ahead and check the facts…

Why do they do that? Because you may not look. Just take their word for it. Don’t. It’s just a smear because they don’t have any real facts…

So we decided to take a look like Rep. Roupe suggested. In her piece above, Roupe links to the Colorado Family Action 2016 Legislative Vote Record. That report doesn’t appear to contain survey responses, just a record of votes. We assume that Roupe wasn’t on the committees in which these bills died, so she simply didn’t take a vote.

But if you Google “CFA Foundation 2016 Voters Guide,” you’ll find a very different website–the one Roupe was actually describing, and the one the “negative ad” against Roupe cites. And here’s what it says about Rep. Kit Roupe investigating Planned Parenthood: 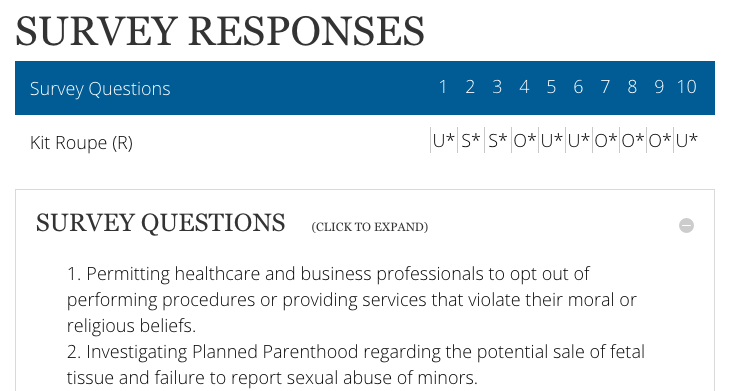 Rep. Roupe did indeed tell Colorado Family Action that she wants to investigate Planned Parenthood. In fact, Roupe gave a supplemental answer to this question further explaining her reasoning:

And she was specific about why! All of which presents very obvious questions about her strenuous denial that just happens to link to the wrong source material.

And unfortunately for Rep. Roupe, the deception doesn’t end there:

I invite you to check my Twitter account, my Facebook pages, Instagram and what you will find is shock, sadness, and deep concern for the victims at the clinic. But they have manufactured a fantasy, hoping you’ll believe what they say.

It’s true that if you search Rep. Kit Roupe’s social media presences today, you won’t find anything but expressions of sympathy for the victims of the Planned Parenthood shootings in Colorado Springs on November 27th of last year.

Because she deleted the ones she didn’t want you to see.

To be honest, we don’t completely understand what Rep. Roupe is trying to accomplish by so demonstrably lying about her record where it concerns Planned Parenthood. It’s true that these are strong attacks on Roupe that she doesn’t need in a race likely to be decided by a few hundred votes, but lying about it when the truth is so easy to find helps nothing.

At the very least, you should let the 527s do the lying. It looks a lot worse when you do it yourself.