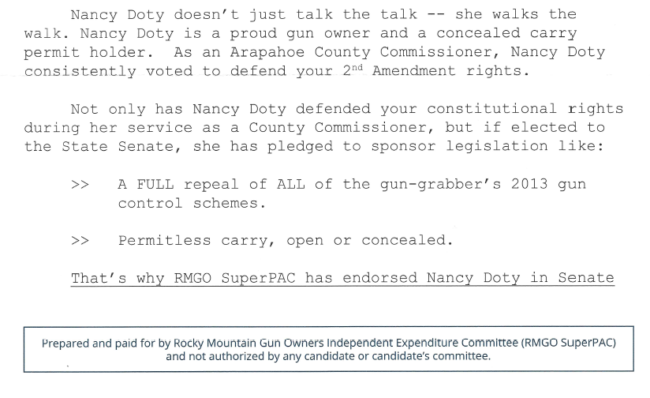 Firearm enthusiast Dudley Brown and his Rocky Mountain Gun Owners (RMGO) group have been a prominent voice in Colorado politics in recent years, though they have proven much more effective at swaying Republican Primary races than earning votes in a General Election. This is not entirely the fault of the RMGO; strident pro-gun rhetoric just doesn’t have the same effect in the Denver suburbs that it might have in places like Weld County.

Nevertheless, RMGO is going to continue to solicit donations and shake fists wherever it can find Republican voters…even if their outreach isn’t particularly helpful for Republican candidates. We were recently forwarded a copy of a mail pitch from RMGO on behalf of GOP Senate candidate Nancy Doty that the candidate herself probably wasn’t too enthusiastic about reading. “State Senate candidate Nancy Doty is a proven Second Amendment patriot,” says the mailer. “That is why RMGO SuperPAC is enthusiastically endorsing Nancy Doty in Senate District 26.” 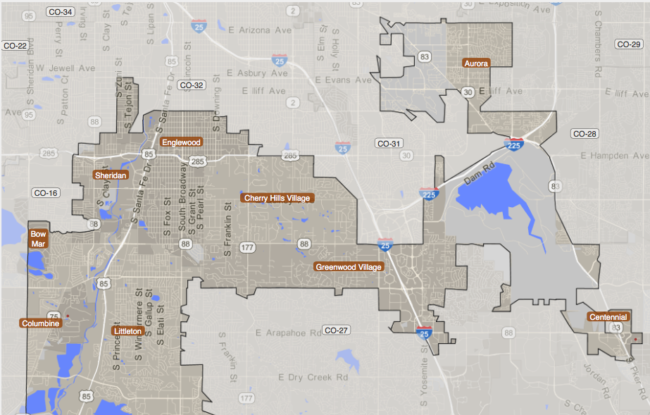 The battle for Senate District 26 is one of the most competitive legislative races of 2016, where Doty and Democrat Daniel Kagan are in a close contest to fill the seat being vacated by the term-limited Democratic Sen. Linda Newell. Located just south of Denver, SD-26 encompasses Arapahoe High School and sits just east of Columbine High School. We probably don’t need to tell you that this community has dealt with two of the most infamous school school shootings in Colorado.

It’s not a coincidence that Doty’s own campaign doesn’t spend any time talking about firearms; you’re not winning undecided voters in SD-26 by telling people that you support “permitless carry, open or concealed.”