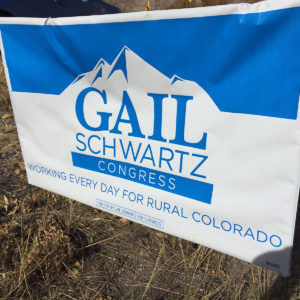 As the Grand Junction Sentinel’s Charles Ashby reports, the “sleeper” race between incumbent GOP Rep. Scott Tipton and Democratic challenger Gail Schwartz of Aspen could be shaping up to be Election Day’s biggest surprise in Colorado:

While the incumbent in the race, U.S. Rep. Scott Tipton, R-Colo., has raised more money overall, his Democratic challenger, Gail Schwartz, has fast caught up.

In the past three months alone, Schwartz raised more than double what Tipton pulled in, $1.1 million compared to the congressman’s $520,000. [Pols emphasis]

During this campaign cycle, Tipton has pulled in about $1.5 million compared to Schwartz’s $1.3 million…

Yesterday, Ashby reported on an ad attacking Schwartz in the district that’s so false it could backfire:

The rest of the Senate also voted for it, along with a large majority in the Colorado House, including numerous Republicans…such as former Sen. Steve King of Grand Junction, current Senate Majority Leader Mark Scheffel of Parker and current Senate President Bill Cadman of Colorado Springs.

Oops! Those are some details that considerably reduce the sting of this ad.

Without public polling in this race, we’re forced to rely on anecdotal reports and rumors about unreleased numbers. In both cases what we hear is very good for Gail Schwartz–a general buzz that’s growing every day as Democrats continue to outperform Republicans across the state in ballot returns. With that said, there are still too many variables we just can’t quantify right now, including the full effect of Donald Trump on the Republican electorate in CD-3. In every material sense, the big money and power players in Colorado remain focused on the marquee CD-6 race between Mike Coffman and Morgan Carroll.

What we can say with confidence is that as Democratic hope grows at October’s end in this crazy election, so grow the aspirations for Gail Schwartz in CD-3. A race that was once a “reach goal” for Democrats in 2016 could be the cornerstone of a 5-2 Democratic majority for Colorado’s congressional delegation when the dust settles.

For Democrats allowing themselves to dream of a House majority, it’s as much as Colorado can do.