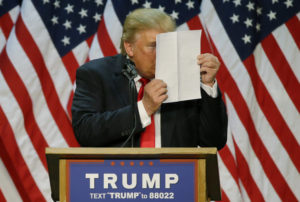 Trump be studyin’ for the debate.

The final Presidential election of 2016 kicks off at 7:00 pm tonight from Las Vegas, Nevada. We won’t be live-blogging the event because, well, we really just want to focus our attention on catching the moment when Republican Donald Trump takes his final leap off of the relevance cliff.

Will a desperate Trump go lower than anyone thought possible in tonight’s debate? If so, will we even notice? Or are we all just numb to everything Trump says at this point?

Is it even possible that Trump could potentially act like a relatively-normal Presidential candidate during these final 90 minutes of political glory? Will Hillary Clinton come to the stage in a full suit of armor at the behest of the Secret Service?

The end is near. That’s a good thing. Enjoy tonight’s debate…