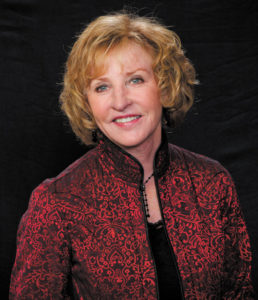 While some Republicans who once supported Trump are now backing off, Colorado state senate candidate Nancy Doty, who previously said she’d vote for the GOP presidential nominee, is now refusing to reveal whom she will vote for, saying she considers “everyone’s vote to be a private decision.”

Doty’s latest position was reported by Brandon Johansson at the Aurora Sentinel, which published Doty’s answer to the question, “Will you vote for Donald Trump, Hillary Clinton or someone else?”

Doty’s response: Yes. I consider my vote private and everyone’s vote to be a private decision.

In June, Doty was out-of-the-closet with her voting preferences, as reported by Marianne Goodland of the Colorado Independent:

On her presidential preference, Doty said she will support the Republican nominee, although Donald Trump was not her first choice. She initially backed Florida Sen. Marco Rubio.

Then, in July, she said Sarah Palin’s Denver speech, in which Palin raved about Trump, was “spot on,” confirming that Doty herself still planned to vote for Trump.

So why the sudden silence on her prez pick? Both the Aurora Sentinel and the Colorado Independent should call her and find out what’s up–and set the record straight for their readers. (Doty did not return my call seeking an explanation, and she’s ignored queries from others on other issues.)

What led Doty, who faces Democratic Rep. Daniel Kagan in hotly contested SD 26, to first be open about her voting preference and then settle on the belief that “everyone’s vote” should be a “private decision?”

Who knows? Maybe Trump’s antics have something to do with it, but the inconsistency deserves to be exposed and explained.